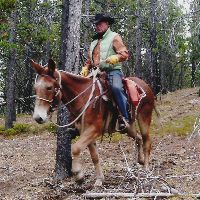 Raymond Donald Hutson, 79, of Sheridan, passed away on Monday, November 20, 2017, at his residence. Raymond D. Hutson was born September 2, 1938 near Arnett,Oklahoma to a cowboy family, Francis LaVaughn Beardsley Hutson and Thomas Lawrence Hutson.  He rode a horse to school in the first grade and horsesand mules were a part of him for the rest of his life.  He broke horses, trained horses and mules, and chariot raced.  He especially enjoyed breaking work teams and was always ready to share his wisdom andexperiences with others.        In 1958 he worked as a wrangler at Roosevelt Lodge in Yellowstone National Park.  This is where he met the love of his life Bea (Beatrice) J. Babione.  They were married on September 11, 1958 and lived aroundBozeman, Montana where they started their family, Donna Rae and Rusty Levi.  He continued to cowboy on ranches.  His interests expanded to chariot racing and wagon trains.  He opened Hutson’s Saddlery on MainStreet in Bozeman.        His chariot racing included Cutters and Roman style.  He raced all over Montana and Wyoming including West Yellowstone and Cheyenne Frontier Days.  He liked the challenge of racing three & four teams at atime, a start from a gunshot and no starting gates.  Raymond raced for over 20 years before turning the lines over to his son and daughter.  He then became the hot walker and trainer.  For many years he was JackGreer’s choice to hold his relay horses.  Jack knew he would get him off to a good start to win many races.        In 1967 Bea & Raymond moved to Sheridan, WY where the family continued ranching and reopened Hutson’s Saddlery.  In 2004 Rusty built him a new saddle shop/museum where he built several new saddles, chaps,all kinds of tack and did leather repair work.        After his first trip to Walker Prairie in 1968 he fell in love with the area and made it a yearly trip for him and the family during hunting season.  They went to enjoy the mountains as a family vacation.Hunting was secondary.  Their camp on the Prairie was a favorite to many people.  Raymond made several trips throughout the year.  He enjoyed packing his mules and horses to take family and friends to the Prairie.Many compliments were heard about his pack string on how nice they looked.  The place has become “Walker Prairie Heaven” to him and his family.  Raymond took pride in everything he did.  He always had a gooddog by his side and many stories to share.        Raymond took part in The Custer Reenactment and the movie Far & Away with his teams and wagons.  He has rebuilt many wagons and has quite a collection of them and horse drawn equipment.  He always said he wasborn 50 years to late.  He would have made a great pioneer.  He was Wagon Master for many wagon trains and enjoyed letting other people share this wonderful experience.  In 1990 as Wagon Master for the Cowboy StateCentennial Wagon Train he led over 500 people and 87 wagons on the route. He had good help from his assistant Wagon Master, Dr. Roy Olson.  Many wagon trains he led into the Hole-In-The Wall and Custer Nat. Forest near Birney, Montana.  People enjoyed them so much they would return everyyear that he had one.  He was so excited to have been able to take his grandson, Josh and great grandson, Landon on the wagon trains.        Raymond and Bea worked together side by side for 59 years on everything they did whether doing chores on the ranch or frying hamburgers for Aunt Bea’s Chuckwagon.  They included their children Donnaand Rusty, grandsons Josh and Landon as well as several foster children, Johnny Freeze, Tom Verwolf, Virgil Babione, Brad Legerski and Rickey Geisler as well as mentoring many others.  They broke many draft horsesin the 70’s & 80’s and sold teams.  They also took part in many parades, shows, weddings and funerals with the teams.        He was a charter member of the Cayuse Cutter Club in Bozeman, MT, the Wyotana Chariot Club in Sheridan, WY and the Northeast WY Draft horse and Mule Assoc.  where he served as president for many years as well aspresident of Sheridan Horse Patrol.   Raymond was a life member of the Sheridan Elks Club and a member of the Banner Community Club.  In 2014 Raymond was honored to be one of the first inductees into the Wyo CowboyHall of Fame.        Raymond was preceded in death by both parents, brother Clayton Hutson, sister Billie Lee Beagle, brother-in-laws Ace Johnson and Joe Beagle, Bill, Cecil and Richard Babione, nephews Eric and Marty Beagleand foster son Tom Verwolf.  He is survived by his wife, Bea, daughter Donna Rae Hutson, son Rusty Levi Hutson, grandson Joshua Levi Hutson, great grandson Landon Levi Hutson, all of Sheridan.  His sister Jane(Gary) Molloy Gage, OK, brothers Malcome (Dorie) Hutson of Wenatchee, WA and Thomas (Stephanie) Hutson of Woodward, OK.  Sister in-laws Joyce Johnson of Billings, MT and Danna Babione of Sheridan and numerous niecesand nephews.A Celebration of Life and reception will be held at 2 PM, Thursday, December 14, 2017, at the Sheridan County Fairgrounds. Memorial donations may be made to the Banner Community Club or the High Country Cowboy Church, c/o D. Hutson, 9 Upper Prairie Dog Road, Banner, WY 82832 Online condolences may be written at www.kanefuneral.com.Kane Funeral Home has been entrusted with arrangements.