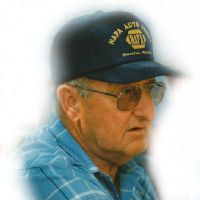 Raymond “Ray” John Bach, 83, of Sheridan, passed away peacefully at his home on Wednesday, December 24, 2014.Ray was born on October 1, 1931, in Canby, MN to Michael and Frances (Hausler) Bach. He worked on the family farm until the age of 16, when he left home and went to work as a horse wrangler on the ZX Ranch in Paisley, OR. He then moved to Sheridan where he met and married Mary Polito in 1952.Ray was a faithful member of Holy Name Church. He loved spending time with his family, hunting, fishing, and attending all local sports events. When Ray wasn\'t enjoying his favorite pastimes he was always busy working as a ranch hand, then at the flour mill, numerous years at Jersey Creamery, later at Pelesky Construction, Spring Creek Coal, and Mullinax Concrete until his retirement.Ray was preceded in death by his parents and his wife of fifty years, Mary Bach. He is survived by his son, Marty and his wife Karen, grandson, Tye Bach and his wife, Amanda,and children Shyanna & Caiden,  granddaughter, Jessica Garrelts and her husband Jeff, three brothers, Hank, Andy, Mike and one sister, Mary Smith.A Visitation with Rosary will be held from 6:00 to 8:00 p.m. on Friday, January 2, 2015, at Kane Funeral Home. Mass of the Christian Burial will be held at 10:00 a.m. on Saturday, January 3, 2015, at Holy Name Church with Father Jim Heiser officiating. Interment will be held in the Sheridan Municipal Cemetery. A reception will follow in the Parish Hall.Memorials to honor Ray may be made to the Sheridan American Legion Post 7,Baseball Booster Club, 260 Murphy Gulch Rd., Sheridan, WY 82801.Kane Funeral Home has been entrusted with arrangements.