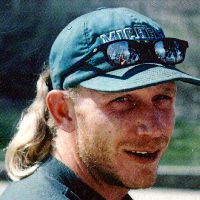 Richard Lee Benbo, 48, passed away on November 12, 2016, due to a long term illness.He loved being around his family, friends, and his dog. Rich loved the outdoors. He enjoyed fishing, hiking, skiing, snow machining, and camping. He loved listening to music, going to concerts, and watching football. One of the biggest highlights of his life was being able to travel with his wife Shelly down the Pacific coast, the Atlantic coast, and being able to see the Statue of Liberty. Rich had a big heart and he left this world way to soon and will be so missed by everyone.Survivors include his wife and soul mate Shelly Benbo, mother Kay Benbo, sister Jody Campbell, half brothers, David and Ronnie Benbo. Step mother Annie Benbo. Daughter Amanda Calderone, sons Adam and Jeremy Bailey, step children Zakk David, Andrew and Robert Calderone. Nieces Jessica and Jamie Campbell and nephew Josh Campbell. He was preceded in death by his father Richard Arlen Benbo, brother Brian Benbo, grandparents Paul and Betty Brantz and his stepson Ricky Martinez.A Graveside Service will be held at 2:00 p.m. on Sunday, November 20, 2016, in the Sheridan Municipal Cemetery.A Reception will follow at the Sheridan Senior Center.Kane Funeral Home has been entrusted with arrangements.