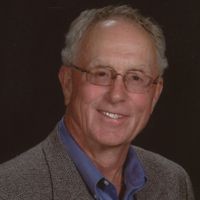 Richard P. Bodine passed away on Thursday, April 3, 2014 from complications of kidney cancer. He was surrounded by his family and special private caregiver, Berdie Wulff.Richard was born to Howard A. and Mary E. (Duffy) Bodine in Livingston, Montana on February 24, 1938. Richard was a group of 16 of boys born at the Lott Hospital between January 26, 1938 and April 12, 1938.Richard grew up on his parents Hereford ranch at Clyde Park, Montana and attended country school until Junior High. He graduated from Park County High School with the Class of 1956. Richard attended Montana State College – Bozeman and graduated in Construction Technology with the Class of 1964 - celebrating 50 years in May. Richard also served in the Montana National Guard and Reserves for eight years.Richard and Charlene Kittelmann Bodine were married in Ekalaka, Mt on September 8, 1962. They celebrated 51 years of marriage. The Bodines have two children. Todd Bodine of Loveland, CO and Melanie Bodine Schwarz (Brynn) of Billings, MT, and their children Scott(Tawni), Morgan, and Jenna. Richard took great pride and was deeply devoted to his granddaughters Morgan and Jenna. He attended every dance recital, volleyball game, tennis match and graduation.Richard worked for Peter Kiewit Sons’ directly out of college. His career took the family to many Montana towns building the Interstate system. In 1972 they moved to Sheridan where he retired in 1987. Richard and Charlene built their dream home south of Sheridan and he pursued his hobby of restoring antique Caterpillar tractors - of which he completed five. He enjoyed collecting antiques, restoring furniture, cleaning art prints and repairing and building clocks. He had a great fondness for Hans Klieber and Joel Ostlind art.Richard is a member of Holy Name Catholic Church, a 55 year member of the BPOE Elks Lodge #246 Livingston, Montana, Antique Caterpillar Machine Owners, Sheridan County Museum, Brinton Museum, Cody Museum, and the Montana Historical Society.A Visitation will be held at 6:00 p.m. with a Rosary at 7:00 p.m. on Tuesday, April 8, 2014 at Kane Funeral Home with Deacon Joe Kristufek officiating . Mass of the Christian Burial will be held at 10:00 a.m. on Wednesday, April 9, 2014 at Holy Name Catholic Church with Father Jim Heiser officiating. A Reception will follow in the Parish Hall.In lieu of flowers the family would like memorials to go the Holy Name Catholic Church, 9 S. Connor, Sheridan, WY 82801Sheridan County Museum, 850 Sibley Circle, Sheridan, WY 82801, or Hospice of the Big Horns, 1401 W. 5th Street, Sheridan, WY 82801The Sheridan area has been their home for 42 years and they have many special friends. Bless you all.Kane Funeral Home has been entrusted with arrangements.