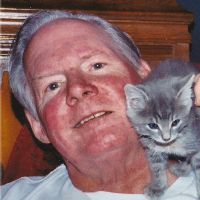 Roderick “Rick” Clark Ingoldsby, 71, passed away on Sunday, August 23, 2015, at his residence. He was born on January 29, 1944, in Pasadena, CA, to parents James and Ethel (Emerson) Ingoldsby.Rick enjoyed dartball, history, socializing and melodrama\'s. He was a member of the Eagles, Elks, Masons, and the Oriental Band.Rick was preceded in death by his parents. He is survived by his Wife, Margie Sheridan, children, Christopher (Etsuko) Ingoldsby of Suffolk, VA, Matthew Ingoldsby of Sheridan, WY, Stephanie (Chad) Moore of Washington Court House, OH, brother, Doug (Pam) Ingoldsby and three grandchildren.A Graveside Service will be held at 10:00 on Saturday, August 29, 2015, in the Sheridan Masonic Cemetery with Military Honors.Memorials to honor Rick may be made to the 2nd Chance Cat Rescue at 305 Broadway, Sheridan, WY 82801.Kane Funeral Home has been entrusted with arrangements.