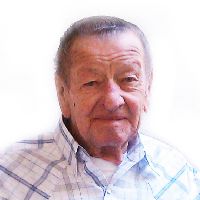 Robert Edgar Cole, 90, of Story, passed away on Sunday, August 2, 2015, at his residence. Services will be held at Kane Funeral Home, 689 Meridian Street, Sheridan, WY, on Saturday, August 15, 2015, at 1:00 p.m. A family inurnment will take place at a later date at the Oregon Trail Veteran’s Cemetery in Evansville, WY.Bob was born March 29, 1925, in Whitewood, SD, to Charles Dillon Cole and Nellie Mae (Best) Cole. Shortly after Bob’s birth, Nellie married Guy F. Montgomery. Guy Montgomery raised Bob as his own son.Bob talked fondly about the early years in Rocky Point, WY. When the dust bowl hit, the family moved to Gillette, WY. As a youth Bob pumped gas, delivered the Billings Gazette and worked in a dairy. In 1943 Bob enlisted in the U.S. Army receiving the Asiatic Pacific Theater Service Ribbon, the Philippine Liberation Ribbon with two Bronze Battle Stars, a Good Conduct Medal, Meritorious Unit Award and a Bronze Arrowhead Medal. After his discharge in 1946 he remained in the reserves and was called back for the Korean Conflict for one year. He was recently featured in the Sheridan Press in the Measures of Devotion Series. In September of 2010, he went to Washington, DC, on the Wyoming Honor Flight, accompanied by his daughter. Bob was very proud of his veteran’s status and the fact that he served in both World War II and the Korean Conflict.In 1947 he went to work for Amoco Production in the Salt Creek Oil Field. He married Elizabeth Jane “Bette” Hubbard on December 5, 1947, and in Gillette, WY. The couple then moved to Midwest, WY. They had two children, “Bobby Gene” and Cheryl. In June of 1982, Bob retired from Amoco as a Field Foreman after a 35 year career in the oil field. After his retirement they moved to Story and began a huge remodel project on their small cottage turning it into a great family home. Bob and Bette loved their home in Story. Bette passed away in September of 2002. Bob was blessed with good health, which allowed him to remain in his home. He spent a lot of time sitting on the deck watching the deer and the turkeys who sought sanctuary in his yard. One of his favorite events was the Annual Hubbard Family Reunion.Bob was also a licensed agent for Farmers Insurance Group for 25 years and maintained an insurance office in Casper until he sold it in 1982.He was preceded in death by his parents; wife, Elizabeth; son, Robert; sisters, Alice Bailey and Florence Montgomery. He is survived by his daughter, Cheryl (Michael) Pesicka of Casper, WY; sisters, Clarice Ruckman of Sedalia, MO; Wyoma Caton of Otterville, MO; Wilma Thiemann of Moses Lake, WA; Faye (Jack) Borron and Helen (Harold) Geer of Casper, WY; his grandchildren; Joshua (Stephanie) Cole of Sheridan, WY; Rewa (Al) Sene of Aurora, CO; and Alexis (Sean) Taggart of Casper, WY; four great-grandchildren and four step-great-grandchildren. He also leaves behind the beloved Hubbard Family.Memorials to honor Bob may be made to the Story Women’s Club at 28 N. Piney Road, Story, WY 82842 or the Sheridan Senior Center at 211 Smith Street, Sheridan, WY 82801.Kane Funeral Home has been entrusted with arrangements.