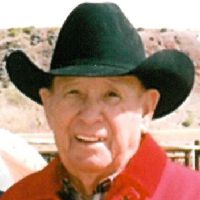 Robert D. Gaskell, 77, of Sheridan, passed away on Monday, June 15, 2015, at St. Vincent\'s Hospital in Billings.Bob was born in Hannah, WY, to parents Percy and Roberta “Bobbie” (Molyneux) Gaskell on July 13, 1937. He enjoyed ranching, riding, long horn cattle, working for Eaton\'s Ranch for nine years, was a Brand Inspector, rancher, trained Polo ponies, shod horses and enjoyed steer tripping. He was a member of the Kalif Shrine Horse Patrol and Jesters, Masons, Elks and Wyoming Steer Ropers Association.Bob was also a long time dedicated breeder of fine quarter horses and a proud member of AQHA. He also held a gold PRCA card.Bob was preceded in death by his parents, wife, Lynda (Scott) Gaskell, and a son, Robbie Gaskell. He is survived by his partner of twenty six years, Gin Ware, of Sheridan, Cody (Marcy) Cunningham, Cashlee and Cricket, all of Banner, siblings, Rojean (Russ) Payne of Laramie, WY, and their family, Kenn (Connie Lee) Gaskell of Riverton, WY, and their family, sister in law, Rose (Slim) Burns of Sheridan, nephew, Phillip (Allie) and their son Brooks.Memorials to honor Bob may be made to Kalif Shrine Horse Patrol at 145 W. Loucks, Sheridan, WY 82801.We will share stories and memories on Friday, July 3, 2015, from 11 – 3 at the Kalif Shrine at 145 W. Loucks, Sheridan. If you would care to have a memory read, we will help with that.Kane Funeral Home has been entrusted with arrangements.