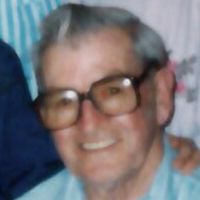 Robert Francis “Bob” Woods, 90, of Sheridan, passed away on Thursday, August 22, 2013, at Sheridan Memorial Hospital.Bob was born on December 5, 1922, to Eugene George and Maude (Adams) Woods in Ogdensburg, NY. He married Jane Devlin on September 17, 1951, in Great Bend, OR. They have been together for almost 62 years. He served in the Army and was a WWII Veteran. He worked many different occupations, owned and operated Roto Rooter in Sheridan, and in later years worked for the U.S. Forest Service.Bob enjoyed fishing, hunting, going to the mountains, and volunteered at the VA for fourteen years. He was a member of Alcoholics Anonymous for forty two years, the Disabled American Veterans, and the American Legion.Bob was preceded in death by his parents; brothers; Harold Woods and William Woods; sisters, Eleanor Geary, Elizabeth Woods and Jane Woods; daughter, Linda Rocovits, and grandson, Daniel Robert Woods. He is survived by his wife, Jane Woods of Sheridan, WY, his son Rick (Kathy) Woods of Sheridan, WY, Mike (Cheryl) Woods of Omaha, NE, son in law Jerry Rocovits of Sheridan, WY, six grandchildren and six great grandchildren.A Memorial Service for Bob will be held at 10:00 am on Thursday, August 29, 2013, at Kane Funeral Home with Deacon Joe Kristufek Officiating with Full Military Honors. A reception will follow the service in the Kane Reception Hall. Inurnment will be in the Willow Grove Cemetery in Buffalo, WY.Donations to honor Bob can be made to the Sheridan Senior Center, 211 Smith Street, Sheridan, Wyoming 82801.Kane Funeral Home has been entrusted with arrangements.