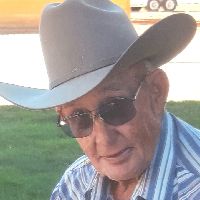 Robert Loren Snyder, 86, of Sheridan, passed away on Sunday, March 4, 2018, at his residence. He was born and raised in the Basin, WY area. He received his education in Tensleep, WY. As a young man, he worked on area ranches and for a time worked at the Holly Sugar Factory in Worland, WY.Bob married Joann Pense of Shell, WY, on February 25, 1954. They made their home in Tensleep for a brief time before moving to Worland. He then moved his family to the Wagon Hammer Ranch near Gillette, WY. The next move took them to the Gordon Ranch at Mayoworth near Kaycee, WY. Then they moved to the Meade Creek Ranch in Sheridan, WY, where he was the ranch manager for many years.Bob was one of the last old-time cowboys. He trailed cows from Tensleep to Arminto to ship by railcar to Omaha. He gathered wild horses for the BLM. He ranched, raised cattle and broke horses all his life.Bob enjoyed roping, chariot racing, reading, and a good joke. He worked hard and played harder. He believed in the Code of the West. In November 2017, he was inducted into the Wyoming Cowboy Hall of Fame.Bob was preceded in death by his parents; Carl and Muriel (Taylor) Snyder of Tensleep, WY, two sisters; Florence Bader of Tensleep and Francis Geis of Worland, one brother; Henry Snyder of Tensleep and his wife Joann Snyder of Buffalo, WY. He is survived by his three children; Carolyn Fox, Marilyn Connolly and Stan Snyder all of Buffalo, WY, four grandsons; Loren Snyder, Clayton Snyder both of Rapid City, SD, Terry Fox of Windsor, CO and Tye Fox of Oswego, IL, four granddaughters; Jayne Sullivan of Parker, CO, Kassie Hansen of Sheridan, WY, Lani Askew of Casper, WY, Brittany Snyder of Rapid City, SD, and fifteen great-grandchildren. Bob is also survived by his significant other, Sherry Bohen, and her children; Charlotte Morgan, Rita Morrison, Chris Young all of Sheridan, WY.At his request no formal services will be held.Donations may be made in his name to the Johnson County Family Crisis Center, 255 E. Fetterman St., Buffalo, WY 82834.Kane Funeral Home has been entrusted with arrangements.

Date:
Start Time:
At his request no formal services will be held.
Location:
Service VideoService Brochure