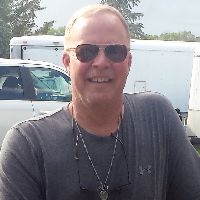 At 4:47 p.m., December 8, 2015, Rodney Kent Schmidt took off from Billings, MT for destination Heaven. The skies were clear and blue, winds light, with visibility clear to the horizon. Rod was surrounded by family and friends showering him with an abundance of love and faith. He died peacefully after waging a year-long battle fighting cardiac issues. Rod was born October 5, 1961 to Marvin and Verda Mae Schmidt in Scott City,KS. He spent his childhood in Leoti, KS before moving with his family to Sheridan, WY.In 1980 he gratefully graduated from Sheridan High School before making a brief appearance at Sheridan Community College. There he met the love of his life, Jody Catterall. He definitely felt she was worth the cost of his tuition. On May 28, 1988 Rod married Jody in Sheridan, WY.Rod was a mechanical wizard and started honing his skills with Lend Lease Trucking in Denver, CO. Not only was he very mechanical, he was also quite the entrepreneur. In 1993 Rod and Jody opened their first Big O Tire store in Louisville, CO. That was the beginning! Rod loved the challenge and thrill of building a business. In 2000 Rod moved his family back to Big Horn, WY and opened Big Horn Mountain Quick Lube in Sheridan. From 2009-2012, Rod expanded his entrepreneurial skills as he dabbled in buying and selling airplanes and real estate. He was continually putting together his next big deal. His crowning achievement was making the 2014 Top Ten Club for his current Big O Tire store.Rod had many passions, but his greatest was his family. Rod and Jody welcomed their daughter Samantha on August 18, 1996. She was joined by her sister Sydney on December 18, 2000. Adventure filled their lives. They skiied and snowmobiled the mountains of Wyoming, Colorado, and Montana. Water skiing the lakes of Wyoming, road-tripping across the country, and exploring on dirt bikes and four wheelers around their Big Horn cabin was quality family time. However, his greatest personal thrill was not only conquering his fear of heights but also becoming a skilled pilot. Rod’s adventurous spirit can best be summed up with one of his favorite phrases, “What-do-you think? Shall we do it?”Through the influence of one of his “circle of friends”, Rod was introduced to “The Rock”. This faith community reconnected Rod to his roots which were grounded in his belief and love for God. From this point on, Rod continued to grow spiritually and influenced the lives of many others.His survivors are at peace knowing Rod is with God and his heavenly family and friends. Those who will miss him most are his wife Jody; daughters Samantha and Sydney; his siblings Jonelle and husband Ray Apking (Littleton, CO); Doug Schmidt and wife Debby (Guymon, OK); Vicki and husband Craig Warren (Houston, TX); Lori Harnar (Santa Fe, NM); niece Lindy, husband Chuck Waltrip, and son CJ (Canyon, TX); in-laws Jerry and Janet Catterall; sister-in-law Jona and husband Duane Horner all of Big Horn, WY; nieces Kristen, husband Zach Schaefer and daughter Alaina (Seattle, WA); and Kendall Horner (Bellingham, WA), and a multitude of friends near and far. Those who knew him best can still hear Rod saying, “Who loves ya, baby?”A Celebration of Life service will be held on Sunday, December 20th at 2:00 p.m. at the Sheridan Wesleyan Church located at 404 W. Brundage Lane, Sheridan, WY. The celebration will continue immediately following his service at The Rock Church, 1100 Big Horn Avenue, Sheridan, WY.In lieu of flowers, memorial donations may be made to Big Horn High School Education Fund, in honor of Rod Schmidt, at P.O. Box 615, Big Horn, WY 82833.Kane Funeral Home has been entrusted with arrangements.