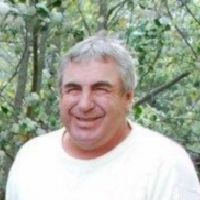 Roger J Brinkerhoff, of Sheridan, WY, died in Sheridan on May 4, 2014.Roger was born on August 27, 1952 in Salina, Utah to Kyle Larsen and Iris (Jones) Brinkerhoff. At a young age he moved to Stevensville, Montana where he spent a majority of his life. He attended school there graduating from Stevensville High School. He lettered in football and was selected to play in the East-West Shrine Game. After high school he served in the Texas South Mission for two years for The Church of Jesus Christ of Latter-day Saints. He attended Rick’s College graduating with a degree in Animal Science with an emphasis in Beef Management. After college he began a lifelong career in ranching for a short time driving long haul semi-truck on the side.Roger met JoAnne Pearce in 1975 and fell in love. They were married in the Mesa Arizona Temple, and they happily spent the next 38 years together.In 1999 the OXO Ranch in Stevensville was sold and the family moved to the Lazy VW Ranch in Sheridan, Wyoming, where they have continued to live since.Roger has had a long history of leadership in The Church of Jesus Christ of Latter-day Saints, recently serving seven years as Bishop of the Sheridan 1st Ward and currently on the Gillette Stake High Council.Roger enjoyed working the Ranch, with the animals and being in the great outdoors. He also enjoyed serving others helping with many projects in the Sheridan area. He loved his family, especially spending time with them and spoiling his grandchildren. He is a foundational rock in our lives whose presence will be greatly felt for many generations.He is survived by wife, JoAnne Brinkerhoff of Sheridan. His children; daughter, Celeste (Dominick) Weigel of Lander, Wyoming; son, Levi (Cari) Brinkerhoff of Lincoln, Nebraska; son, Kaleb (Bridget) Brinkerhoff of Sheridan, Wyoming; son, Ammon (Danette) Brinkerhoff of Sheridan; son, Jamin Brinkerhoff of Sheridan, Wyoming. His parents, Kyle (Iris) Brinkerhoff of Billings, Montana. His siblings; brother, Neil (Cynthia) Brinkerhoff of Sheridan, Wyoming; sister, Gaylene Fox of Herra, Oklahoma; brother, Garth (Mae Dee) Brinkerhoff of Idaho Falls, Idaho; sister, Pearl (Scott) Fowler of Sandy, Utah; sister, Myrna (Lupe) Garcia of Idaho Falls, Idaho. And 11 grandchildren; Mary, Kimberly, Emily, Amy, Brink, and Shelly Weigel, Landon and Kaybree Brinkerhoff, Bayla and Koen Brinkerhoff, and Sophia Brinkerhoff.A Visitation will be held for family and friends from 6-8 p.m. on Friday, May 9, 2014 at The Church of Jesus Christ of Latter-day Saints. Funeral Services will be 11:00 am, Saturday, May 10, 2014 at The Church of Jesus Christ of Latter-day Saints, 2051 Colonial Drive, Sheridan, Wyoming. Burial will follow on Monday, May 12, 2014 in Paris, Idaho.Kane Funeral Home has been entrusted with arrangements.