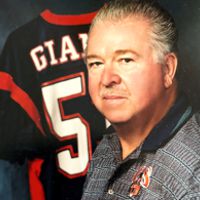 Monday, May 27th, 2019, Roger (Coach) Kelly, loving husband and father of two daughters, passed away at the age of 78 surrounded by family.Roger was born July 30th, 1940, in Needles, California. He was a Cal Poly graduate as well as Mustang football player. And boy did he love the game of football.Roger exchanged his football cleats for a whistle when he began his coaching tradition in the summer of 1965. Roger proudly coached at Bakersfield High, Bakersfield College, North High Bakersfield, Paso Robles High, Redwood High (1969-1989)as well as College of the Sequoias(1989-2004). Coach Kelly’s legacy will forever influence the game of football. His passion inspired countless young men as a coach, friend, father figure and mentor. Many of you have shared the impact Coach Kelly has had on your life, thank you on behalf of the family.Roger and Susan Kelly relocated to Sheridan, Wyoming, in 2015 where he enjoyed hunting, fly fishing, camping and his very active Labrador dog, Cheyenne. Roger’s final fishing excursion turned into a fishing “how-to clinic” when he landed a 10-pound Rainbow trout at the base Wyoming’s Big Horn Mountains.Roger is survived by his wife Susan, daughters Kim Kelly and Michele Carlton, as well as five grandchildren and seven great grandchildren. Roger and Susan were married 58 years. He was proceeded in death by his parents, Jessie and John, as well as his younger brother Doug Kelly.A memorial serviced is planned to celebrate Roger’s life on June 29th, 2019,at 11:00 AM at the Gateway Church, 1100 S.Sowell St, in Visalia, California. Further information regarding this service is forthcoming. All are welcome to attend.Roger will be missed by his family, fellow coaches, players, camping buddies and so many more! We love you Coach.Kane Funeral Home has been entrusted with local arrangements.