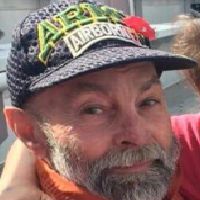 Bud is survived by his wife, Nonie; his daughters, April (John) Baumgartner of Buffalo and Heather (Mark) Sanford of Greybull; his brother Jim (Pat) Bush of Story; his four grandchildren, Ryan Baumgartner of Sheridan, and Grace, Torrey and Bennett Sanford of Greybull; and numerous nieces, nephews, and good friends. He is preceded in death by his parents, Arta and Pat Bush, and his niece, Jill (Bush) Kmett.Bud was born on May 20, 1940, in Cody, Wyoming to Arta (Holman) and Pat Bush. He grew up and graduated from high school in San Francisco, CA, but spent every summer at his Aunt Vi and Uncle Murray’s ranch south of Buffalo. He served in the Army, in the 101st Airborne Division, from 1963-66. After his honorable discharge in 1966, he worked on ranches around Buffalo, Clearmont, and Kaycee. He married Nonie in 1972, and raised their daughters, April and Heather with love, support, and encouragement. His daughters, as well as his nieces, nephews, and grandchildren, were very special to him. He was very proud of them and loved spending time with them.Bud enjoyed the night rodeos and the Johnson County Fair with his girls, and even more as his grandson was involved with 4H for years. He was an avid sports fan, and rarely missed a chance to cheer on the Arvada-Clearmont Panthers—whether his grandson was playing or not. He had a very positive impact on the young people in Clearmont and they enjoyed his enthusiastic support. Bud’s most important legacy was his faith and love of God. He has been a born again believer for the past 30+ years and always enjoyed sharing God’s love with others. It was his unwavering faith and trust in God that gave him strength to endure years of illness. His love for family and friends kept his attitude positive and uplifting, despite difficult times.A memorial service is scheduled for 2pm on Saturday, October 17th at the Clearmont Community Church. All are welcome to attend and celebrate Bud’s life. The family would like to thank the medical staff at the Sheridan VA—both on the medical floor and at the Mountain View Living Center for their attentive and loving care of Bud throughout the years and especially these last months of his life.