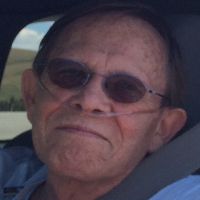 Ronald Lee Bays was born on February 27, 1952, to Lois Jean Czaban and Donald Lee Bays in Sheridan, WY and passed away on September 9, 2015. Ron grew up in CA but frequently came back to WY until he moved back here as a young adult. Ron’s heart was with the Wyoming mountains where he loved to be. He was a great outdoorsman throughout his life where he loved to kayak on the rivers any chance he got and he also taught his love to others on how to safely enjoy the sport. Ron moved on to hang gliding which he also loved. The freedom it gave him to be flying above the mountains gave him a peace of mind and a sense of excitement that he thrived on. He shared that love of flying with many others by either giving them the chance to enjoy a flight or by teaching them to fly and learn on their own. Anything to do with the outdoors he would do whether it was hunting, fishing, camping or just driving around town with his faithful companion Chewy in the passenger seat. Ron and Chewy were the best of buds and you never found one without the other until Ron finally had to give Chewy a new home. That broke Ron’s heart but he thought only of Chewy and what was best for him.Ron never met a stranger. He would stop and talk with anyone who would engage in conversation with him and formed many friendships this way. Ron loved people and anyone who was lucky enough to be considered his friend he would do anything for them. Ron loved to cook and, having run restaurants, would make you a dinner where everything was timed perfectly and came to the table at the same time hot, ready and perfect! From managing JB’s to working in the coal mine to working and eventually owning Chem-Dry of Sheridan Ron took pride in what he did and enjoyed the people he encountered and he wanted everything in his life to be Top of the Line!Ron passed away surrounded by friends and family. He is survived by his daughter, Jennifer Bays of Oregon, two step sons, Donovan McKnight and wife Elizabeth McKnight of Sheridan, WY, Keith McKnight of Oregon, two sisters, Linda Lytle and husband Bill Lytle of Sheridan, WY, Tara Johansson aka (Kelly) and life partner Mark Johansson of California, nieces Chery Walker and Sharon Meixner of Sheridan, WY and his favorite nephew Mark Wave Johansson of California.Ron was preceded in death by both his parents and his beloved grandson Connor Freesene.There will be a Celebration of Life at 10:00 on Saturday, October 10, 2015, at Kane Funeral Home. A reception will follow in the Kane Reception Hall.Kane Funeral Home has been entrusted with arrangements.