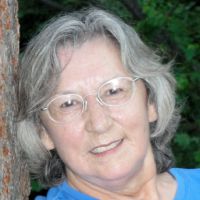 View Service Folder | Click for Video Tribute After a long and courageous battle against cancer, Rose Marie (Gourneau) Palmer, 69, passed away on July 5, 2014 surrounded by the love of family at home in Sheridan, WY. She was born December 20, 1944 in Belcourt, North Dakota to parents Benjamin and Eleanor (Grandbois) Gourneau.Rose spent her childhood in Belcourt, North Dakota. She graduated in 1964 from Flandreau Indian School in Flandreau, South Dakota. During High School she was involved in many activities and often won the perfect attendance award. She especially enjoyed cheerleading. Rose was very social and after school she worked for Solo, Cenex, and Wal-mart, where she loved getting to know many people.Rose married Vere Palmer in 1965 in Casper, WY. They were married 25 years and raised four sons together in Casper and Shoshoni, WY. Rose was active in her church and enjoyed bingo, bowling, hunting, fishing, Indian bead work, mountain man rendezvous, and traveling. Her greatest love was her large family. She had an infectious laugh and was often the life of the party.Rose was preceded in death by her parents and a nephew, Kevin LeBrun. She is survived by her sister Doreen Lebrun and her husband Reginald; sons Lee Palmer and wife Christy; Kevin Palmer and wife Jennifer, and their children Keenan, Alex, Hannah, and Sarah; Shane Palmer and wife Lori, and their children Dawson and Daxton; Robert Palmer and wife Regan, and their children Hayden, Danika, Micah, and Hudson; and many special nieces and nephews.A visitation will be held at Kane Funeral Home, Sheridan, WY on Sunday, July 13, at 6 pm, with a rosary at 7 pm. A Mass of the Christian Burial will be held at Holy Name Catholic Church, Sheridan, WY, on Monday, July 14, 2014 at 12:00, with Father Jim Heiser officiating. Internment will follow at the Sheridan Municipal Cemetery. A reception will follow in the parish hall.In lieu of flowers the family requests memorial donations be made to the American Cancer Society, 333 S. Beach, Casper, WY 82601, the Hospice of the Big Horns, P.O. Box 391, Sheridan, WY 82801, the Sheridan Senior Center, 211 Smith St., Sheridan, WY 82801 or to the Sheridan Dog and Cat Shelter, 84 East Ridge Rd., Sheridan, WY 82801.Kane Funeral Home has been entrusted with arrangements.