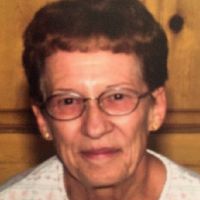 Rose Mary Steel, 81, of Sheridan, passed away on Monday, May 21, 2018, at her residence. She was born in Sheridan, WY, on October 27, 1936, to Walter and Margaret (Lloyd) Bales. She grew up on the family ranch at Quietus, MT, where she helped with haying and riding. She attended a one room country school for the first 8 years. When she graduated her mother and siblings moved to Sheridan in the winter so she could attend high school. She graduated from Sheridan High in 1954. After graduation she attended the University of Wyoming for one year.On December 30, 1955, she was united in marriage to Robert Crumpacker. Their only Child, Robert Jay, was born in Sheridan. They were later divorced.Rose continued her education at Sheridan College, Eastern Montana College and the University of Wyoming graduating with a BA Degree in elementary education. She began her teaching career at Highland Park School. She then taught for 7 years in rural schools. She returned to Sheridan teaching at Coffeen School for 21 years until her retirement. During her career she was active in several teachers organizations.On April 3, 1965, Rose was married to Jack D. Steel who adopted her son Jay. Rose and Jack enjoyed camping in the mountains, fishing on Lake DeSmet and traveling in their motor home to visit their grandchildren.Rose was an avid gardener and always had a large garden. She enjoyed planting, tending, harvesting and preserving all that she grew. She was especially fond of her flowers. Over the years she had four special cats that gave her great pleasure. In her leisure time she liked to read mysteries. In recent years she was involved with the Kalif Players melodramas which she enjoyed very much.She was preceded in death by her parents and husband. She is survived by her son Jay (Judy) Steel of Lewiston, ID; four grandchildren Jonathan Steel of Seattle, WA, Brenda (Travis ) Hartman of Seattle, WA, Linda Steel of Portland, OR, and Diana (Zac Conklin-Ferrel) Steel of Portland, OR,; sister Kathleen Jorgensen of Billings, MT; brother Keith (Christl) Bales of, Sheridan, WY. She is also survived by several nieces and nephews and special friends Scott and Rose Redder.Memorial may be sent to Kalif Shrine Players (melodrama) for sound equipment at P.O. Box K, Sheridan, WY 82801 or to the Sheridan Dog and Cat Shelter, 84 East Ridge Road, Sheridan, WY 82801.Per her request no services will be held.Kane Funeral Home has been entrusted with arrangements.