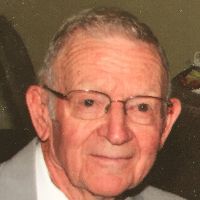 Roy M. Sharp passed away peacefully at his home on December 25, 2014.Roy was born on September 26, 1926 to Leslie C. And Dorothy Sharp in Hardin, MT, but spent almost all of his life in and around the Sheridan area.He went to work in the hay fields for his great Aunt and Uncle Shreve at the age of 10 during the summer months. At the age of 16 he dropped out of school and went to work at the Kaizer Shipyards in Vancouver, WA as a production welder. After working there for several months he returned home and finished his schooling. After school hours and on weekends he worked at Champions Funeral Home. At the age of 17 he enlisted in the army, and served in the pacific area eventually being stationed in Japan. After his return to civilian life he went to work in construction for a short while, then helped his father open the original Spring Creek coal mine near Decker, MT.When the Korean War broke out he reentered the service where he served 19 months in Korea always close behind the battle lines in a MASH hospital.After his return from Korea, he eventually went to work for the post office as a letter carrier for 27 and a half years. During his postal service he served as the state president of the National Letter Carriers Assoc. of Wyoming. Once he retired from the post office he went to work for the county sheriff as a detention and civil process officer for ten years.When he retired from the sheriffs office he worked at several part time jobs until he reached the age of 82.Roy was active in several organizations over the years. He was the originator of the first search and rescue group in Sheridan. He also was one of the founders of the Jeep Herders Club (a group of people with 4 wheel vehicles that traveled around to old historical places and land marks), Good Sam\'s RV Groups, Sheridan Masonic Lodge #8, and served as master from 1973 - 1974. Plus the Kalif Shrine.Roy was well known and respected by many. He seldom said no to anyone who needed help.He was preceded in death by his parents, 3 wives, Margaret, Florence and JoAnne. His first born son Carl L. Sharp and his step son Herb Schroder and a sister, Donna Teini. He is survived by his son, Steven D. Sharp (Merla) and their children Danielle M. Dickie (Jason) and Clifton R. Sharp. Also by his adopted daughter Lisa A. Sayer (Cliff) and her three children Natasha Sharp, Jeremiah Young, Jeffrey Morgan. Daughter in-law Vicki Schroder and her two children Scott Schroder (Rachel) and Kristi Carlquist (Kris). And thirteen great grandchildren. Also his brother Leslie M. Sharp (Bud) and two sisters Minnie Burton and Priscilla Hill.The family will be having a memorial service sometime in the spring. In lieu of flowers, memorials to honor Roy can be made to a charity of your choice.Kane Funeral Home has been entrusted with arrangements.