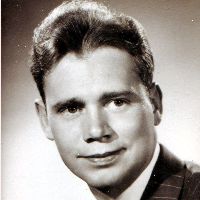 Rudy John Anselmi 93, of Sheridan passed away February 2, 2017. He was the son of Leo and Rena Anselmi. Rudy attended Arvada high school in Colorado where he played football and track. After high school he served in the U.S. Navy in World War II and later graduated from the University of Colorado in Pharmacy. He moved to Sheridan in 1949 working at the VA Hospital as Chief of Pharmacy. His first wife Teresa preceded him in death, and he married Lura Irving in 1985. He retired to his ranch, the Quarter Circle 41, where he enjoyed raising cows and living his dream of being a Cowboy. He moved back to Sheridan in 2004. He loved the outdoors, the mountains, fishing, hunting, stories with grandchildren, and hard work. He is survived by his wife Lura, his son’s Robert and John, his step children Susan Choman and Blair Morgan, his brother Robert, and numerous nieces, nephews, and grandchildren. He will be dearly missed by all.Mass of the Christian Burial will be held at 10:00 a.m. on Friday, February 10, 2017, at Holy Name Catholic Church with Father Robert Rodgers officiating. Inurnment with Military Honors will be held in the Sheridan Elks Memorial Cemetery with a reception to follow in the Parish Hall.Kane Funeral Home has been entrusted with arrangements.