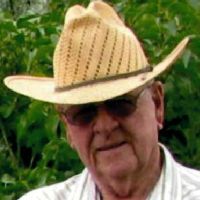 Our beloved Sam Cross of Ranchester, WY, departed this earth to expand his love for fishing in heaven on Monday, September 7, 2015. He was born in Harrisburg, NE, to John R. and Orpha Cross on July 18, 1938,the youngest of eight children.He married Irene Kaufman May 3, 1956. They have three children, Rodney,Bonnie and Connie. He was a U.S Army Veteran. He drove semi, worked at ICI Explosives and Nelson Bros.He is survived by his wife of 59 years, Irene. His children Rodney (Barb)Cross of Harrisburg, NE, Bonnie(Dewey) Longtine of Ranchester, WY and Connie(Coy) Pepper of Winnemucca, NV, grandchildren, Ryan, Jessie and Jeni Cross, Shawn and Jason Aylesworth and Jamie Pepper and numerous great grandchildren. He was proceeded in death by his parents, 2 sisters, 1 brother, and great-grandsons Kody and Kyle Aylesworth.A Celebration of Life will be held at 3:00 pm on Friday, September 11, 2015, at the Ranchester Community Center for family and friends.Memorials may be sent to the American Heart Association at 710 2nd Ave., Ste 900, Seattle, WA 98104.Kane Funeral Home has been entrusted with arrangements.