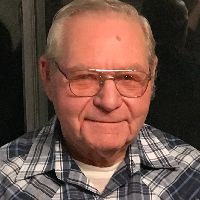 Samuel F. Horton, 82, of Sheridan, passed away on Thursday, April 12, 2018, at the Sheridan Memorial Hospital with his family around him. He was born to Horace and Clara (Tanner) Horton. He married Loretta Wegner in an elopement to Hardin, MT, on September 26, 1953, in the Congregational Church. They were married for 64 wonderful years and had 5 beautiful children.Sam was a very quiet person, said he learned more by listening. He was not a devious person, his motto was “what goes around comes around,” so vengeance was really the Lords. He, like all young men, started working at a very young age, married young and was a hard worker, worked in oil fields, seismograph, but mostly a heavy duty mechanic. He had belonged to the National Guard, was a life member of the Elks #520, he was the chairperson of the Elks Bingo and the Elks Hides Drive. The Tuesday morning coffee clutch will miss Sam for having the donuts and coffee always ready. He volunteered at the Senior Center HUB. Sam was preceded in death by his parents and sister. He is survived by his wife, Loretta and children, Julie (Ed) Guerrero of WY, Jeffrey (Dorinda) Horton of TX, Corrine (Howard) Drake of OR, Calvin Horton of WY, Michael (Tanya) Horton of CA, two brothers, Berton Horton of MT, Ted Boggess of WY, a half sister, Joan Gibson of VA, 10 grandchildren and 7 great grand children.A special thanks to the greatest doctors, Thomas Mayer and Jason Akerman and the nurses for the excellent care. There will be no services or celebration of life per Sam\'s request. In lieu of flowers, memorials to honor Sam may be made to the Sheridan Senior Center HUB at 211 Smith St., Sheridan, WY 82801 or to the Sheridan Elks #520 Building Fund at 45 W. Brundage, Sheridan, WY 82801.Kane Funeral Home has been entrusted with arrangements.

Date:
Start Time:
There will be no services or celebration of life per Sam\'s request.
Location:
Service VideoService Brochure