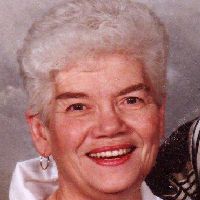 Sarah McKinley, returned to her heavenly home May 28, 2016. She was born on November 5, 1937, in San Antonio, TX, to Margaret (Taylor) and Leo E. Davis. She attended and graduated Garland High School and enrolled in Southwest Texas State Teachers College before moving with her family to Sheridan, WY in 1956. There she met the love of her life, Ridgely Niver McKinley. They married at the Calvary Baptist Church on June 20th 1957. They had four children Trent, Greg, Brett and Sharilyn. Sarah worked at Woolworth Dept. store; she also worked as an Electrolysis Practitioner traveling between Sheridan and Gillette before finding her dream job working at The Infant Center in Sheridan. She loved taking care of all the babies. She never met a baby she didn’t love. She worked her way up to the position of Director of the infant center before retiring in 1998. She was a member of Calvary Baptist Church and First Baptist Church for many years. She enjoyed spending time with Ridge, riding around the golf course while he played golf, going on drives; visiting with friends at the Senior Center and enjoyed being an ambassador for them. She loved being around family and friends. Collecting bells and Sunflower, listening to and singing songs Sarah is survived by her husband, of almost 59 years, Ridgely. Her children Trent (Leslie) McKinley, Greg, Brett (Marilyn) McKinley and Sharilyn (Ronnie) Harvey. Grandchildren Josh Desiree, Cortney, Emilee, Zack, Travis, Tyler, Andrew, Jacob, Jeremy, Jessica and seven greatgrand children, Connor, Alexis, Tori, Athena, Jaden, Liam and Katya. Uncle Bill (Wilma) Taylor of Houston TX, Uncle John (Gloria) Taylor of San Antonio TX Cousins Terri, Lenny, Nanci, Karen and Bob. She was preceded in Death by both sets of grandparents, her parents Leo and Margaret Davis and her sister Ruth Duke.Memorials to Honor Sarah may be made to the donor’s choice.\"At Sarah\'s request there will be no services.\" Kane Funeral Home has been entrusted with arrangements.