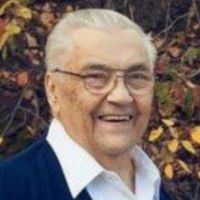 Selmer Eugene Moeller, 88, passed away July 30, 2016 at the VA Mountain View Nursing Home with his family at his side.Selmer was born July 28, 1928 in Midwest, Wyoming to Amel D. and Anna K. (Vasicek) Moeller. He graduated from Midwest High School and the University of Wyoming with a degree in pre-med. Selmer was proud of his service in the US Army until 1957 achieving rank of 1st Lieutenant; he was stationed in New Mexico, Illinois and Korea.Selmer worked as an assistant chef while attending UW. One night during his junior year in college he stopped to help a young woman stranded on a rural road with a flat tire. This college coed turned out to be the love of his life, Crewe Kooi Reynolds. They married at St. Peter’s Episcopal Church in Sheridan in 1952, and remained married for 44 years until her death in 1996.After the Army, Selmer worked at D&D Hardware, and eventually started his own locksmithing business. Their family grew with two children, Doris Anne and James Amel.Selmer enjoyed painting, watching vintage movies, visiting with family and spending time at the Sheridan Senior Center as an ambassador. He belonged to the Sheridan Mason Lodge #8 and enjoyed being a member of the motorcycle patrol for the Kalif Shrine. Selmer was a caring, giving person and spent many years assisting his widowed mother-in-law, Doris Kooi Reynolds with all her household chores. Also, for many years he and his daughter, Doris Anne, served the local population by delivering Meals-on-Wheels, for which in 2010, they received the Jefferson Award nomination for public service.Selmer was preceded in death by his parents, wife, son, James, sister, Lucille Campbell (Kenneth) and brother, Amel D., Jr. (Maxine). He is survived by his daughter, Doris Anne of Sheridan; brother, John H. (Shirley) of Rawlins; daughter-in-law, Christine of Rapid City, SD, granddaughters, Jennifer Geffre (Andrew) of Sioux Falls, SD, Ashley Barbion (Kobi) of Rapid City SD; three great grandchildren: Nevaeh, Ian and Devin and several nieces and nephews.Services will be held on Saturday, August 6, 2016, Assembly of God Church, 1045 Lewis St., Sheridan, 2:00 pm, Pastor Jay Littlefield presiding, with reception following. A family service with military honors will be held at St Peter’s Episcopal Chapel, Father John Inserra presiding. Selmer will be inurned in St Peter’s Columbarium.Please, no flowers; donations may be made to the Sheridan Senior Center, 211 Smith St; Sheridan, WY 82801.Special thanks goes to all those at the Sheridan VA who helped Selmer in his final year. Their generous spirits and loving care made such a big difference, and he loved them.Kane Funeral Home has been entrusted with arrangements.