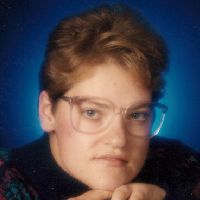 Shaun Beasley 44, passed into the hands of the Lord on Wednesday July 8, 2015, at Sheridan Memorial Hospital surrounded by her family following a stroke. Shaun was born on March 30, 1971, in Salem, OR, the first daughter of John and Susan Beasley. She was a special child who touched hearts with her spirit and drive, always gaining respect by those who knew her. The family moved to Sheridan 6 weeks after her birth. By the time Shaun turned two, she had lived in three states and Germany. She turned three in Flagstaff, AZ, and then thoroughly enjoyed a move to Richmond, VA. Her development was assessed at the Medical College of Virginia and she was enrolled into a preschool for special needs children. The next year, the family moved to Minneapolis, MN, where she attended a special needs school and was soon delighted by the birth of her sister Heather, who became a huge fan of her big sister.Shaun enjoyed the adventure of moving and was excited when the family returned to Sheridan in 1977, where she attended Hill School. Two years later, she was again thrilled with another sister, Jeriann, who joined Heather in her love and support for Shaun. She later attended Big Horn, as well as, Ranchester Middle Schools.Shaun loved to swim and was trained by the late Tom Cook for a Special Olympics swim meet in Cheyenne, where she took first in the backstroke and free style. This is something she would repeat for the next 8 years. In 1986, she was voted Most Inspirational Athlete at an area meet. That same year, she moved to Omaha, NE, where she was mainstreamed into their school system. At 19, she was chosen as one of 8 special needs women across the nation to swim in the Olympic Fest in Minneapolis and, the next year, swam in the International Special Olympics also held in Minneapolis.At age 29, Shaun moved to a group home in Kearney, NE, and in 2005, she moved back to Sheridan. She attended Day Hab at Easter Seals and then Jodi’s Heart in 2009, which became Eagle Ridge Rehabilitation Services. Shaun loved her staff at Eagle Ridge and was happy to return on Monday mornings after spending the weekends with her parents. She also enjoyed the Eagle Ridge home she shared with others.Shaun is survived by her parents, John and Susan Beasley, two sisters, Heather (JT) Vaughan and Jeriann (Arik) Jacobson, six nieces and nephews (Shaelynn, Kael, Torin and Carlin Vaughan and Harper and Declan Jacobson) and cousins David and Gerald Powers. She was preceded in death by grandparents, John and Billie Beasley, Jerry and Geneva Powers and uncle Duane Powers.Donations can be sent to Eagle Ridge Rehabilitation Services at 54 Seymour Street, Sheridan, Wyoming 82801.Shaun will be buried in the Big Horn cemetery at 12:30 pm on July 16, 2015, followed by a Celebration of Her Life at 2:00 pm at the First United Methodist Church, 215 West Works. All are welcome to attend a reception following the service in the church cafeteria.Kane Funeral Home has been entrusted with arrangements.