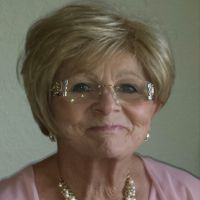 View Service Folder|Click for Video Tribute Shirley SchaferJune 19,1945- April 24, 2016Gillette-Shirley Mae Schafer passed away Sunday (April 24th,2016) at Close to Home Hospice House in Gillette. Shirley was 70 years old. Born June 19, 1945 at her home in Milbank, SD to John Valentine and Mildred Irene Blum (Bowen); Shirley was named after the woman who delivered her. Shirley was one of eight siblings. She lived on the family farm until 1947, when the family left the farm and moved to town. She attended High School in Milbank, SD up until the 10th grade. Shirley spent her teenage years working, but was far more fond of attending dances, a skill she rarely talked about but excelled at. In order to earn money, Shirley would often babysit for friends and neighbors. In July 1962, she was doing just that when Dell Henry Schafer dropped his date off at the residence at which Shirley was babysitting. He noticed her almost immediately and Dell, never short of courage, asked Shirley if she would like to attend a dance the following weekend. Six months later, on December 7, 1962, the two were wed. They hung around eastern South Dakota briefly where the couple welcomed their first child, Dawn Marie Schafer. Times were tough and work scarce, so just three months later, hoping to find employment in the oil fields, the couple relocated to Gillette, WY. Dell found work and Shirley stayed home to raise Dawn. A few short years later the young couple welcomed their second child, a boy James Edward Schafer. Shirley recognized the need for income to support the growing family; she purchased and operated a school bus, which ran the first bus route to Little Powder School. Shirley and Dell founded D&S Casing Service in 1976. This oilfield service company provided for them and their family for over 35 years. Shirley and Dell were fortunate enough to celebrate 40 years of marriage on December 7, 2002. Shirley lost Dell just a few short months later. Life after losing Dell was a tough transition for Shirley, but Shirley was no stranger to tough times. Shirley was a member of the Campbell County Cemetery Board along with her good friend Edie Reno and Christina Maycock. She found solace in volunteering at CASA, Hospice, and Master Gardeners. When not volunteering she could be found helping to raise her grandchildren. She was an exceptional grandmother whose work ethic and generosity knew no bounds when it came to her grandchildren. It should also be mentioned that Shirley occasionally enjoyed road trips to Deadwood with her good friend Bub Werner. Shirley’s last few years on earth were happy. She was very proud to be a realtor at Razor City Reality. Her routine visits to the Quick Shop for coffee and gossip brought her great joy. She was able to forge countless friendships and impact a great deal of people in the autumn of her life. She was greatly loved and will be deeply missed by family and friends alike. She was preceded in death by six siblings and her husband, Dell Henry Schafer. She is survived by her sister Caroline Vines of Rapid City, SD and her two children Dawn and Jim Schafer, both of Gillette, and five grandchildren. Visitation will be at 9:00 a.m., Saturday, April 30, 2016 at the Roadway Alliance Church, 811 Hemlock Avenue, Gillette, WY. Services will follow at 10:00 a.m. at the Roadway Alliance Church with Pastor Gordon Harper officiating. Burial will be in the Mount Pisgah Cemetery. A reception will follow in the Shelter at Mount Pisgah Cemetery.Donations may be made to CASA, P.O. Box 2257,Gillette, WY 82716.Kane Funeral Home has been entrusted with arrangements.