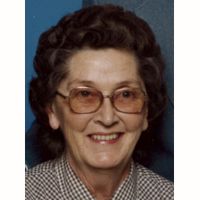 Stella P. Steele, 87, a young soul in an old worn out body, was called home to be with her Heavenly Father and Jesus Christ on Saturday, December 14, 2013 at the Sheridan Memorial Hospital with her children beside her. She held on to be reunited with her soul mate, David N. Steele on their 66th wedding anniversary, December 15, 2013.Stella was born June 17, 1926 to Charles A. and Katherine Pearl (Baker) Birdie in Yakima, WA. She graduated from Rapid City High School. She married David Norris Steele in Sundance, WY on December 15, 1947. Her greatest achievement was who she was... a wife, mother, grandmother, sister, daughter, friend. Loved by everyone and she loved them.In her younger years, she loved camping, hunting, fishing, horseback riding with friends and family. She was very talented, she taught herself to crochet, cross-stitch, tatting, knitting and sewing. She learned how to paint by watching Bob Ross. She loved playing solitaire, word search and brain games. She enjoyed reading and watching movies. She made the BEST chocolate chip cookies, and home made carrot cake...those will be greatly missed! She loved to listen to her grandson sing and play the guitar, reminded her of her husband.She was a life member of the VFW/AUX 10105, Dayton Benefit Club, Odd Fellows/Cantons she had many leadership positions over the years. She volunteered many hours to service...making quilts, cookies, cakes and serving many dinners at Dayton Community Hall. She helped with sending care packages to veterans in the Vietnam War.Many of her family and friends were waiting for her to join them. She is survived by her sisters; Violet Hade, Francy Pytlik, Karen Robers and Brother Charles A. Birdie. Her children; Kathy (Don) Bashus, Billy David Steele, DeLynn (Keith) Cooley, grandchildren; Rob and Leah Cherni, Krista and Steven Williams, Dylin (Sirena), Colton (Victoria), Dalton, and Cierra Cooley. Great grandchildren; Hailey and Hanna Williams, Cameron Christopherson (Dylin), plus two babies on the way. Many nieces, nephews, great nieces and great nephews.A Visitation for Family and Friends will be from 6:00 to 8:00 p.m. on Friday, December 20, 2013 at Kane Funeral Home. A Celebration of Life will be held at 12:00 p.m. on Saturday, December 21, 2013 at Kane Funeral Home. Interment will be in the Sheridan Municipal Cemetery with a Reception to follow at the Church of Jesus Christ of Later Day Saints at 2051 Colonial Dr., Sheridan, WY.Kane Funeral Home has been entrusted with arrangements.