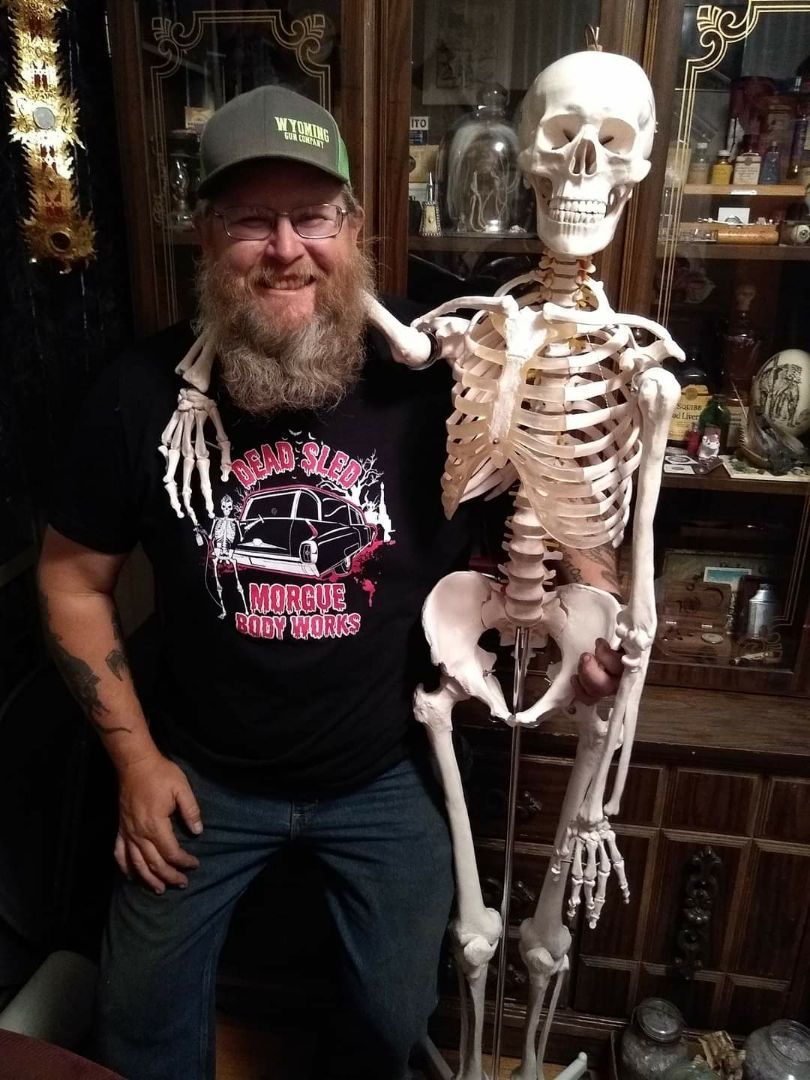 Steven Robert Haugen, age 44, passed away on June 25, 2021 at his residence.  He was the doting husband of Michelle for the last 22 years.  He was the proud father of Michael and Jonathan, beloved son of Bob and Jeri, baby brother to Vicki, and a wonderful uncle, nephew, cousin, friend, and mentor to so many.

Steven was born in Sheridan, Wyoming on June 3, 1977 to Robert and Jeri Haugen.  He attended Big Horn School K-12 and graduated in 1995.  He attended Sheridan College, but ultimately decided to jump right into the work force and got his first job at Valley Motor Honda.  He held a variety of jobs over the years, with his primary profession being a tire technician. With time, he declared he ‘was too old for this crap’ and got out of the tire profession in 2015.  He joined the City of Sheridan as a street technician that same year.

In August 1997, he and Michelle welcomed their first born son Michael Steven, and then in January 1999 they welcomed their second son, Jonathan Matthew.  On July 10, 1999, he married the love of his life, Michelle Coleman in Big Horn, Wyoming.  They resided in Sheridan for the duration of their marriage.

Steven wasan avid outdoorsman, and loved to hunt with his sons, father and friends.  He was a member of the Sheridan Sportsman’s Association and spent many happy hours shooting trap and black powder. He was the current president of the Sheridan Chapter of the Wyoming Muzzleloaders’ Association.  He was a devoted shooting sports leader of Sheridan County 4-H and ran the muzzleloading/black

powder shoot during county competitions.  Steven spent intensive time with Sheridan’s youth teaching them gun safety and how to be better sportsmen.

One of his absolute favorite activities was the Sheridan WYO Rodeo where he and his father got the opportunity to fire off the canon prior to each night’s rodeo performance. Taught by his father, Steven was in the process of passing along the torch to his sons.  It was a happy evening indeed when the menfolk would gather around the canon, drink a beer and argue about who would light the fuse that evening.

He was a member of the Sheridan Jaycees for several years under duress by his sister.  Although a reluctant participant, he was in his element while wearing a loin cloth and serving mimosas with Fred his ape side kick at 6am to hung over participants. He was a member of the Big Horn Mountain Eagles and could often be found hanging out and playing pool or darts with his wife and friends.  He was a member of the Sheridan Sportsman’s Club, several Local Archery Leagues, the Wyoming Muzzleloader’s Association, a leader in Sheridan County 4-H, and would assist local groups in the area with their Toys for Tots programs.

Steven was an avid motorcycle enthusiast and rode with numerous bike organizations. Although not a member, he was especially proud to ride with vets and other biking clubs while giving back to his community.  He was loved by all who met him and made service to humanity his way of life.

Steven was dedicated to his family.  He devoted himself to his wife and his families’ well being.  He worked long hours to ensure that they were always cared for.  He and Michelle loved having “date nights”

where they could be found playing pool, darts or just having dinner and drinks.

He spent as much time as possible with his parents doing odd jobs, and putzing around with his father doing dad/son things.  He spent hours roaming auctions and other oddity shops with his mother.  He collected the obscure, and was never happier when he would receive a new shrunken head in the mail to add to his collection.

An eclectic combination of the macab and gruesome were something that Steven collected with abandon.  From Kelly the skeleton, to a full sized coffin, Steven relished each new unique find.  Receiving a severed finger in an envelope would make his “perfect” Tuesday.

Steven was a devoted, loving and generous man.  He put his family first in all things that he did.  His dad was one of his best friends.  His mom was his adventuring partner.  His wife was his rock and the love of his life.  His boys were the joy in his days.  His friend circle was extensive and he valued each and every one of them, near and far.  Although sometimes a little crass and crusty, Steven had a heart of gold that knew no bounds.  It was not uncommon for him to drop what he was doing to assist someone in need. He gave freely of himself and asked for little in return.   Although far from perfect, he was always true to himself and we have all been blessed to have had him in our lives.  Words will never express how much he will be missed.

Services will be held at Kane’s Funeral Home on Saturday, July 3, 2021 at 2pm.  A reception will immediately follow the services at the Big Horn Mountain Eagles in Commercial Park.  A private graveside service will be held at a later time.

Date:
July 3, 2021
Start Time:
2:00 pm
Location:
A Celebration Of Life will be held Saturday July 3, 2021 at Kane Funeral Home with a reception to follow at the Eagles.
Tribute VideoService VideoService Brochure