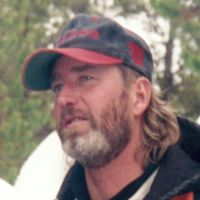 Terry Lee Davis, 54, of Sheridan, went to be with his Heavenly Father on Sunday, September 8, 2013 after a tragic accident in the Big Horn Mountains.Terry was born on June 26, 1959 in Memphis, TN, to parents Tommy and Mary Davis. He attended school in Memphis until the family moved to Sheridan, WY in 1975. Terry graduated from Sheridan High School in 1977.Terry was employed as a Locomotive Engineer for the BNSF with 34 years of service. He was a member of the UTU-E Union. He hired out as a Brakeman Conductor and later on went into Engine Service.Terry was an avid sportsman and enjoyed rifle hunting, bow hunting and fishing. He went as far south as TN to duck hunt and fish a few times. There were many fire rings made on the Big Horn Mountains during hunting seasons, where many of us gathered around. We called it “lie time” as the stories told each year became more exagerated. Cousins and friends from TN came to hunt here at “Terry\'s Hunting Camp” where he ran a tight ship over the years. He would have two aunts, an uncle from TN, along with many friends that would drop by often.Terry married Cindy Phares Davis and they later divorced. From this union Terry\'s sweet daughter, Catie, was born. She was the pride and joy of his life. He was truly a loving, caring dad, not only to Catie but, to his step son, Matt.Terry\'s youngest brother, Matt and Grandparents preceded him in death. He is survived by his daughter, Caitlin Mae Davis, his parents; Tommy and Mary Davis, brothers; Larry of Rapid City, SD and Roger Davis of Sheridan along with a step son, Matt Phares, who, was a part of Terry\'s life from the time he was five. He also leaves behind numerous cousins, aunts, uncles and a host of friends.Terry will be sadly missed by us all.A Celebration on Life will be held at 10:00 a.m. on Monday, September 16, 2013 at Kane Funeral Home with Pastor Stephan Anderson of Grace Baptist Church officiating. A Reception will follow in the Kane Reception Hall.Kane Funeral Home has been entrusted with arrangements.