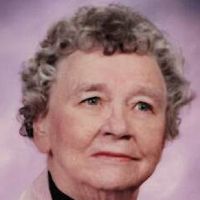 Thelma M. Griggs, 98, of Sheridan, passed away on Sunday, August 28, 2016, at the Westview Health Care Center. She was born on August 4, 1918, in Goodell, IA, to parents Cornelius and Eva (Miller) Bode. She married Audery “AK” Griggs on August 7, 1936, in Forest City, IA. They moved to Sheridan in 1994.Thelma enjoyed gardening, going to the Y, watching westerns, reading and traveling.Thelma was preceded in death by her parents and husband. She is survived by her children, Lori (Jerry) Lund of Sheridan, WY, and Lois “Tweedy” (Marley) Johnson of Klemme, IA, brother Paul Bode of Osage, IA, two grandchildren, and several nieces and nephews.Burial has taken place. Memorials to honor Thelma may be made to the Sheridan Dog and Cat Shelter at 84 East Ridge Road, Sheridan, WY 82801.Kane Funeral Home has been entrusted with arrangements.