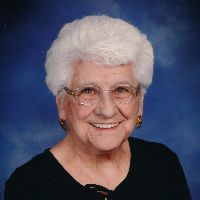 Theresa “Terry” Spomer passed away Sunday morning, January 7, 2018, at Green House Living for Sheridan.Terry was born April 9, 1921, in Acme, Wyoming. Her parents were Bart and Theresa Favero. She grew up in Acme and went to elementary school, and then Sheridan High School. She graduated from SHS in 1939. She then attended Heiman\'s Commercial School. From 1940 to 1945, she worked as a secretary for the U.S. Army Signal Corps in the Pentagon in Washington, DC. In 1945, she moved to Steubenville, OH, where she worked for the Steubenville School District as a secretary.In 1947, she returned to Sheridan. She met and married Henry (Hank) Spomer. She began working for the Kiewit Compay. Her career with Kiewit spanned 35 years and four district managers. It was a job she truly loved. She retired in 1982, as Executive Secretary. While at Kiewit\'s she developed friendships that lasted a lifetime. After retirement she was an active member of the Sheridan Community. She did volunteer work for the Children\'s Center and the Next to New Shop. She was a member of Immanuel Lutheran Church and the Immanuel Altar Guild. She was also a member of the Memorial Hospital Foundation, the Memorial Hospital Guild, and Friends of the Library.Terry enjoyed all sports, especially playing golf and watching the Rockies and Broncos and March Madness. She loved flower gardening, crossword puzzles, reading, and having lunch with friends. And she loved her dachshunds, Fritzi and Gerda.Terry was preceded in death by her husband, her parents, her sister Madaliene, and two brothers, Al and Mario. She is survived by her brother Ben and several nephews and nieces: George and Esther Mathews, Sheila and Jack Donahue, Gary Roush of Tuscon, AZ, and Glenn and Donna Roush of Knoxville, TN. She is also survived by a number of great nephews and nieces: Vicki Popiel and Roni (Travis) Reed.Services will be held at 2:00 pm on Thursday, January 11, 2018, at the Immanuel Lutheran Church with Pastor Paul J Cain officiating. Interment will be in the Sheridan Municipal Cemetery with a Reception to follow at the church.Memorials may be given to Sheridan Children\'s Center, 863 Highland Ave., Sheridan, WY 82801, Immanuel Lutheran Church, 1300 W. 5th St., Sheridan, WY 82801 or Green House Living for Sheridan, 2311 Shirley Cove, Sheridan, WY 82801.Kane Funeral Home has been entrusted with arrangements.