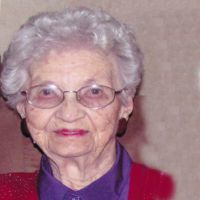 ‍Thilda A. Haugen, 103, of Sheridan, passed away on Tuesday, December 20, 2016, at the Sheridan Manor.Thilda was born on January 24, 1913 to Arthur and Lina (Warstad) Skalet in Thief River Falls, MN. She was the oldest of eight children. She attended 16 J School through eighth grade.  She was confirmed at Ebenezer Church.On September 6, 1939 Thilda was united in marriage to Olaf Haugen at St. Hilaire, MN. They had two children in MN, Lenora and Oliver. In 1949, they moved to Wyoming where their son Wayne was born. They called him the Wyoming Kid.   Tillie loved reading and read a set of encyclopedias to educate herself further. She enjoyed cooking and baking and the favorite cookies of the grandchildren were sugar cookies, with frosting. She also kept the Norwegian tradition of making lefse for the holidays and taught her daughter to make it. Tillie had driven a tractor on her parents farm as a girl so she learned to drive a car and got a license at age 63, never drove but had to prove she could do it. She enjoyed flowers, bingo at the Senior Center, crocheting, knitting and embroidering dish towels.  She made many afghans for family and friends. Tillie loved to dance and would try to dance a little with the walker at the Sheridan Manor. Her favorite expression was Uffda.Tillie was proud of her Norwegian heritage and Lutheran faith. In her nineties she sang cute Norwegian songs to her great grand daughters that her uncles had taught her as a child.  She was a member of the Trinity Lutheran Church.Thilda was preceded in death by her parents, husband, Olaf, son, Oliver and daughter-in-law Audrey Haugen, her sisters Gladys Walseth, Helen Sampley, Stella Halverson, and brother Alton Skalet. She is survived by her daughter Lenora (Bill) Aksamit of Sheridan, her son Wayne (Connie) Haugen, her grandchildren, Lisa Aksamit, Rob (Tonya) Aksamit, Marianne (Tod) Carlson, Melanie Beihl, Jason (Kelly) Haugen, James (Sharon) Haugen, Monte (Germaine) Haugen, Lafe (Lujuana) Haugen, Joseph (Lola) Haugen, Ron (Mary) Haugen. She is also survived by her twin sisters Myrtle and Murial Skalet of Red Lake Falls, MN. Tillie has many great grandchildren and great great grandchildren.    Memorials to honor Thilda can be made to the Sheridan Senior Center at 211 Smith St., Sheridan, WY 82801 or to the Trinity Lutheran Church at 135 Crescent Dr., Sheridan, WY 82801.A Visitation will be held from 6:00 to 7:00 p.m. on Wednesday, December 28, 2016, at Kane Funeral Home. Services will be held at 10:00 a.m. on Thursday, December 29, 2016, at the Trinity Lutheran Church with Pastor Phil Wold officiating. Interment will be in the Sheridan Municipal Cemetery with a reception to follow at the church.