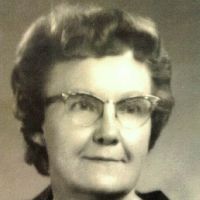 Thresia “Tracy” Margaret Lutz Ogilvie, 99, passed away on Tuesday, June 7, 2016, at the Westview Health Care Center. She was born on July 28, 1916, in Herman, MN, to parents Clarence and Marie (Leis) Lutz. She married George “Tom” Ogilvie in September of 1934.Tracy enjoyed reading, going to the mountains and spending time with her family. She was a member of the Seventh Day Adventist Church.Tracy was preceded in death by her parents, husband, Tom, three children; Gerald, Judy, Jim, and two grandsons. She is survived by her grandchildren, Krystal Weaver of Collegedale, TN, Yvonne Terry-McGelrath of Chelsea, MI, son in law, Duncan (Gayle) Terry of Loveland, CO, great niece, Karo Hamilton of Sheridan, WY, and niece, Diane Jones of Ranchester, WY.Services will be held at 2:00 on Tuesday, July 19, 2016, at the Seventh Day Adventist Church. Inurnment will be held in the Sheridan Elks Memorial Cemetery with a reception to follow at the church.Memorials to honor Tracy may be made to Seventh Day Adventist Church at 345 S. Main St., Sheridan, WY 82801.Kane Funeral Home has been entrusted with arrangements.