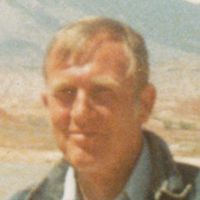 T. Edward Dahlin died on January 25, 2015 at the VA Medical Center with his wife and family by his side. Thure Edward Dahlin was born in a log cabin in Passaic, WY to Elma Elizabeth (Ort) and Thure Edwin Dahlin. He grew up on a homestead in Otter Creek, MT the eldest of four boys with his younger brothers Ben, John and Wes. They rode their horses to a one-room school house, 2 miles up hill each way.Ed graduated from Sheridan High School in 1943 and was drafted into the U.S. Army at 18 years old and posted in Germany during World War II December 3, 1943 to May 1946.Ed served again in the Korean War September 28, 1950 to November 19, 1951, and was honorably discharged in 1951 at 26 years old. Ed received numerous awards while serving in both wars.Ed met Florence Joanne Connolly at a winter dance at the Decker dance hall and when a big blizzard hit, he chivalrously drove her and her (borrowed) vehicle home and walked back in the storm. Ed and Flo were married that summer in June 1952. They raised five children and were rarely apart their 63 years of marriage.Ed worked at the VA Hospital as Assistant Chief. He loved to be with his family and spend time in the mountains with his children and grandchildren. Ed was intellectual and intelligent, modest, and politically agnostic with a good sense of humor. He taught all his children unconditional love and appreciation for the outdoors. His mind was sharp until the end, even as his body gave out during his last years. He will be dearly missed and never forgotten by all that knew him.Ed is preceded in death by his parents and brothers. He is survived by his wife Flo and his five children Gary (Debbie), Bill (Rachel), Joni (Larry) Hiler, Wes, and Eric (Hayley Reeb); and his 15 grandchildren, Kaydee (Lucas Winter), Tanner, Tucker, and Crystal, Annie (Cas) Brewer, Tate, Jacob (Jessi) Hiler, David,Hannah and Leah Hiler, Skyler, Kinsey, Trenton, Jessica (Ken) Reaves-Miller, Elle, and Taylor Wilson And 5 great-grandchildren, Jackson and Mason (Lil Elmer) Brewer, Flora Winter, Brigit Miller and Colton Reaves.A Visitation will be held from 6 – 8 p.m. on Thursday, January 29, 2015, at Kane Funeral Home. Services will be held at 2:00 p.m. on Friday, January 30, 2015, at Kane Funeral Home with Chaplain Arden Haeffner officiating. Interment with Military Honors will be held in the Sheridan Municipal Cemetery. A Reception will follow in the Kane Reception Hall.In lieu of flowers donations in Ed\'s name may be made to the Parkinson\'s Research at www.pdf.org/fund_memdon or mail to Parkinson\'s Research, 1359 Broadway, Suite 1509, New York, NY10018.Online condolences may be written at www.kanefuneral.com.Kane Funeral Home has been entrusted with arrangements.