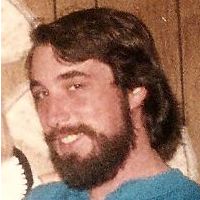 Timothy James Halfman, 55, of Sheridan, WY , formerly of Crown Point, IN, passed away on October 11, 2016 at his home.Timothy was born July 9, 1961, at Gary, IN, to John Halfman Jr. and Nancy Ruth (Carpenter) Halfman.He was a graduate of Crown Point High School. He joined the Army in 1980. He was a Unit Supply Specialist and received an Army Service Ribbon, Overseas Service Ribbon, Army Achievement Medal, Rifle M16 (Sharpshooter), and Good Conduct Medal. He was a truck driver before he retired early due to health problems.He is survived by his daughter, Brittany (Paul) Simpson of Crawfordsville, IN; his mother of Crown Point; brother John (Gwen) Halfman of Laramie, WY; sisters Laurie Halfman(Brian) Sherwood of Valparaiso, IN and Beth Halfman Thompson of Crown Point, IN; grandson Dylan Simpson, nieces and nephews.He was preceded in death by his father.There will be private family memorial service at a later date. In lieu of flowers, live your life as best you can and hug your loved ones often.