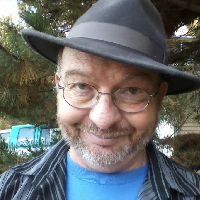 Timothy Kevin Cummings, 59, of Sheridan, passed away on Friday, September 23, 2016 at the University of Colorado Hospital, Aurora, CO. He was born on February 12, 1957 in Greybull, WY, to parents James Albert and Dixie Marjean (Presnall) Cummings. He met Melana Lachelt through a mutual friend via letter in 1976. They corresponded almost exclusively through handwritten missives for 5 years before he asked her to marry him in a letter. They were married on February 26, 1983 in Denver, CO.Tim was very creative and enjoyed painting, writing, music (both creating and consuming), had a love for owls and tortoises, Pink Floyd, Doctor Who, playing chess, fishing, watching foreign films and documentaries on WWII and the Civil War, collecting and wearing hats, enjoying Russian literature and culture and attempting to learn the language, and spending time with his grandson, Jensen. He was a member of Holy Name Catholic Church, but his church family was the Wesleyan Church for more than 23 years. Tim volunteered at the People’s Food Bank telling people about Christ’s love for them, something which he emanated in his own life by giving those in need his last few dollars or a pair of shoes that he kept in his car for such an occasion. One of the greatest joys in Tim’s life was conducting and composing for the Cloud Peak Symphony in Sheridan.Tim graduated from Greybull High School in 1975, attended the University of Wyoming, and obtained a Bachelor’s degree in Theology from Canadian Bible College in Regina, Saskatchewan. He was a campus minister for Inter-Varsity Christian Fellowship at the University of Oklahoma and at the University of Arkansas. He wrote the church page column, “An Upward Glance” for almost 20 years for both the Hamilton, MT and Sheridan, WY newspapers. He pastored the Christian and Missionary Alliance Church in both towns for 9 years. While pastoring in Sheridan, Tim became a reporter and later the editor of The Sheridan Press. Following this, he became the owner of Big Horn Bibles and Books and pastored the Story Community Church. He then worked at RENEW for 5 years in various positions. He worked as an Administrative Aid to the Mayor’s office, a Service Coordinator at the Sheridan Homeless Shelter, an English teacher for Eleutian Technology, an employee of Holly Seed, and a Park Monitor for Whitney Benefits.Tim was preceded in death by his father and his son-in-law, Jesse. He is survived by his wife Melana, their daughters, Sarah Salveson and Emily Cummings, and grandson, Jensen Salveson, all of Sheridan, and mother, Dixie Cummings of Greybull.Services will be held at 2:00p.m. on Friday, September 30, 2016 at the Sheridan Wesleyan Church with Pastor Darrell White officiating.Kane Funeral Home has been entrusted with arrangements.