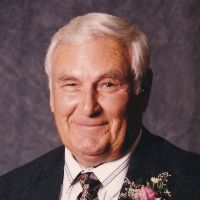 Francis “Tiny” A. Smith, 89, of Story, passed away on Monday, February 15, 2016, at the VA Hospital in Sheridan, Wyoming. Tiny was born in Sheridan, Wyoming on September 16, 1926, to Carl J. and Rita Hon Smith. Tiny grew up in Wyola, Montana then graduated from Sheridan High School in 1944. He then served in the military in 1946, and was stationed in the Philippines. Upon his return, he earned his degree at the University of Wyoming between 1947 and 1951. Tiny was married to Patricia Ann Pape in 1949, then  went to work for the Soil Conservation Service where he worked at various locations throughout the  State of Wyoming until retirement in Sheridan in 1981.Tiny was a respected member of the Sheridan and Story communities where he participated in several local organizations which included Sheridan Athletic Association, Sheridan Quarterback Club, Youth Incorporated, Cowboy Joe Club, Elks Club and the Thornrider Foundation. Preceded in death by his son, Stephen, his Mother,Father, three brothers, Karl, Vincent, Paul and a sister Rita Wolfe. He is survived by his sons, Thomas A. Smith, David M. Smith, David\'s wife Doaa, Granddaughter Maya and his loving companion of many years Betty Jane McKee.A Mass will be held at 10:00 on Saturday, February 20, 2016, at Holy Name Church with Father Ron Stolcis officiating. A Reception will follow immediately in the parish hall. A private family inurnment will be held later in the Elks Memorial Cemetery.In lieu of flowers donations may be made to the Story Volunteer Fire Department at 30 N. Piney Rd., Story, WY 82842.Kane Funeral Home has been entrusted with arrangements.