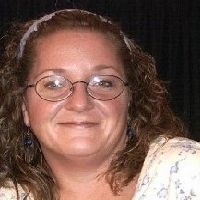 Traci Koltiska, 45, of Sheridan, passed away on Tuesday, April 19, 2016, at the Sheridan Memorial Hospital. She was born on December 16, 1970, in Hardin, MT, to parents Paul G. and Joan Greenfield Koltiska and was raised in Sheridan. She married Andrew Lee Greaves in the Big Horn Mountains in June of 2008. Their lives were fulfilled when they completed their family with two beautiful boys – Noah Greaves and Bodhi Greaves. And Traci never considered herself as a step-parent to Andy’s son, Dalton Greaves, but as another “mom” to him. Andy and the 3 boys were her world, & she was the proudest mom ever!As the mother of children with autism, Traci became a huge proponent of helping families with autistic children find medical treatments and therapies that were outside of the box of mainstream methods. Traci is fondly remembered by all who knew her as a vivacious spirit – always the comedian, always upbeat and positive, with an infectious smile and laugh. Traci had a love for fashion, glitz, and glamour! She loved to help people dress up, happy to critique an outfit, & loved having sparkly nails. She had a deep love for music and could often be heard singing or humming. Traci was the most loyal of friends – if you were mad, she was mad for you! If you were happy, she was happy for you! But she always had a good spin on a bad situation. The most important thing to Traci was her family. Andy and her boys were of the center of her world. Traci was kind, sweet, hilariously obnoxious, and generous to a fault – always willing to give you the shirt off her back. She had a personality that was larger than life!Traci was preceded in death by her grandparents and parents. She is survived by her husband and children, and her siblings, Mark (Kathy) Koltiska of Salt Lake City, UT and Paul (Sonia) Koltiska of Mesa, AZ.Cremation has taken place. There will be a celebration of life held at the Big Horn Mountain Eagles (1760 Commercial Ave, Sheridan) on Sat, April 30 from 5pm to 8pm.Memorials to honor Traci may be made to the Child Development Center at 345 S. Linden Ave.,Sheridan, WY 82801.Kane Funeral Home has been entrusted with arrangements.

Date:
Start Time:
There will be a celebration of life held at the Big Horn Mountain Eagles (1760 Commercial Ave, Sheridan) on Sat, April 30 from 5pm to 8pm.
Location:
Tribute VideoService VideoService Brochure