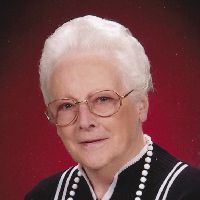 Vera (Kaufmann) Rhoades, 98, of Sheridan, passed away, Tuesday, October 18, at the Green House Living for Sheridan.Vera Laura Mohr was born January 5, 1918 to George and Emma Mohr in Monroe, Nebraska. She was the oldest of three sisters, Floreen Schreibeis and Lillian Ostegard.Vera married Carl Kaufmann on November 18, 1937. They had two children, Charlene and Clifford. Carl and Vera moved to Wyoming where they ranched until the mid 1970s. Carl passed away in 1982.Vera was proud to be a ranch wife and loved to take care of her gardens and many flower beds. She enjoyed spending time at their cabin the Big Horn Mountains and playing cards with family and friends.Vera moved to Bellingham, WA, where she married Fordyce “Dusty” Rhoades in 1993. They returned to Sheridan where they lived until Dusty passed away in 2005.Vera was preceeded in death by her parents, her husbands, her sister, Lillian and her son, Clifford. She is survived by her daughter, Charlene (Del) of Story, WY, and 4 grandchildren and 8 great grandchildren; Lori (Regan) McDuffie, Alan (Katie) Church – Myles, Peyton and Mia, Becky (Ron) Fuller – Kyle and Bailey and Tim (Angela) Kaufmann – Payne and Gracie. Her daughter in law, Rosie Kaufmann, and several nieces and nephews.A Funeral Service will be at 10:00 AM, Saturday, October 29, 2016, at the Immanuel Lutheran Church with Pastor Paul J Cain officiating. Internment will be in the Dayton Cemetery immediately following the service. A gathering of family and friends will be at the Immanuel Lutheran Church following the internment.Memorials to honor Vera may be made to the Martin Luther Grammer School, 1300 W. 5th, Sheridan, WY 82801.Kane Funeral Home has been entrusted with arrangements.