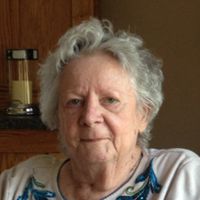 Verna “Jean” Putman of Sheridan/Story passed away on January 11, 2014 after a short illness, surrounded by family. She was preceded in death by her parents, infant brother, Ralph Geis Jr., and daughter Linda Lightfoot.Jean was born October 18, 1929 in Gering, NE to Ralph and Geneva (McFarland) Geis. She was the eldest followed by two brothers and three sisters. Jean graduated from high school in Gering, NE where she met her high school sweetheart, Glenn H. Putman. They were married in Denver, CO on November 29, 1947. They were married for 66 years.While raising their children, Jean worked at the Oregon Trail Bank in Guernsey, WY. After 30 years she retired as an executive officer of the bank. She was a member of the National Association of Banking Women, Beta Sigma Phi, Story Garden Club and the Baptist Church.At times in their life Glenn and Jean lived in Gering, NE, Pilot Butte, WY, Guernsey, WY, Story, WY and Sheridan, WY. When they retired they built their dream home, “The Cabin”, in Story, which was enjoyed by family and friends for many years.Jean enjoyed planting and working in her beautiful gardens, and cooking for family and friends. In earlier years they danced to many of the Big Band\'s of the time and cleared many dance floors.Jean is survived by her husband, Glenn H. Putman of Sheridan, and sons Gregg (Korleen) Putman of CO, and Rob (Julie) Putman of OR, six grandchildren: Eric (Martha) Lightfoot, Todd (Annette) Lightfoot, Jason (Monica) Lightfoot, Tark Putman, Cassidy Putman, Alicia Willis, five great-grandchildren: Alison, Duncan, Zoe, and Simone Lightfoot, Shawn Smith, brothers: Gregg and Neale Geis both of CO, sisters: Mary Lou Colving of TN, Barbara Vagneur of CO, and Sharon Foos of NE. She is also survived by many numerous nieces and nephews and other family and friends.At this time a memorial service is planned for early summer. Memorials may be made to the Sheridan Senior Center Meals at 211 Smith St., Sheridan, WY 82801 or to the Sheridan Dog and Cat Shelter at 84 East Ridge Road, Sheridan, WY 82801.Kane Funeral Home has been entrusted with arrangements.