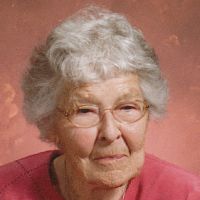 Vieva C. (Paulus) Jeffers passed away at Westview Health Care Center on Tuesday, June 17, 2014. She was born on October 4,1911 at home to Frank and Lena (Collins) Paulus with her grandmother serving as midwife for her delivery. She attendedschools in Ranchester, graduating from high school in 1927. She attended the University of Wyoming, graduating in 1929 with a Life Certificate in Elementary Education. She taught school at Ohlman School, the Little Blue School House and at Big Horn.She was married on April 21, 1934 to Deyo Jeffers, when they eloped to Billings and were married in a double wedding ceremony with their life-long friends, Gwen and George Harper.Deyo and Vieva ran a dude ranch on Columbus Creek for a few years. In 1944, they moved to a ranch on Little Piney Creek where Vieva resided until 2012 when she moved to Westview.During their life on Little Piney, they made many friends with the hunters that came to hunt annually, staying in the house, with Vieva making all the hunters’ favorite homemade treats.Vieva had a great love of traveling, visiting many of the places in the United States and Canada that she had only read about and dreamed of visiting. She took her first plane ride in the early 1950s in a single engine plane, with the flight ending in a planecrash. She celebrated her 95th birthday with a parasailing expedition with her then 11 year old great grandson in Belize. Just imagine all the fun she had in between.Vieva was a member of the Story Community Church, Story Garden Club, Sheridan County Cattlewomen, and, for more than 85 years, a member of the Wyoming Homemakers and  Shell-Creek Piney Homemakers Club.She was preceded in death by her husband, her parents, her brother, her daughter Jeanne Edwards, her daughter-in-law Vicki Jeffers and one grandson. She is survived by her son Raymond (Darla) Jeffers of Roundup, MT, her daughter Kay(Stan) Bohnsack of Sheridan, five grandchildren, and nine great grandchildren.Services will be held at Kane Funeral Home at 10:00 a.m. on Saturday, June 21, 2014, with burial in Sheridan Municipal Cemetery. A luncheon will follow at the Sheridan Elks Lodge.In lieu of flowers, memorials may be made to Wyoming Elks State Trust, c/o Sheridan Elks Lodge, 45 West Brundage, Sheridan, WY 82801.Kane Funeral Home has been entrusted with arrangements.