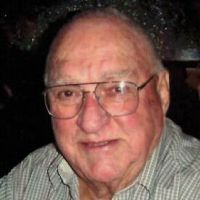 Vincent Eugene “Gene” McNair, 92, of Sheridan, passed away on Wednesday, January 13, 2016, at the Westview Health Care Center. He was born on September 30, 1923, in Sheridan to parents Clyde and Ethel (Richards) McNair, being their sixth of eight children born to them. He graduated from Sheridan High School in June of 1941. He married his wife Ruby in April of 1964.Gene was in the US Army Air Corps for a period of three years during WWII. He worked for Gamble Robinson Co., managed the Alamo Motel for a time, worked for the Highway Department and then the US Postal Service. He retired from the post office in May of 1984. He was a member of the American Legion and the Elks.Gene was preceded in death by his parents, son, Bill McNair, brothers, Verl and Vernon, sisters, Vera, Violet, Velda, and daughter, Cheryl McIntyre. He is survived by his wife, Ruby, son, Jeff McNair of St. Paul, MN, sister, Betty Raymond of Billings, MT, brother, Bill (Tavy) McNair of Escondido, CA, daughter, Sandra Hansen, son Bill (Annette) Hansen, granddaughter, Heather (Eric) Hardgrave all of Cheyenne, WY, grandson, Chris McIntyre and great grandson, Cody McIntyre of Billings, MT.Cremation has taken place. No services are planned.Memorials to honor Gene can be made to the Sheridan Senior Center at 211 Smith St., Sheridan, WY 82801.Kane Funeral Home has been entrusted with arrangements.