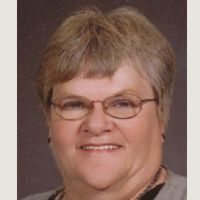 View Service Folder | Click for Video Tribute Virginia “Ginny” Elizabeth Brown, 66, of Sheridan, passed away on Saturday, March 22, 2014 at the Memorial Hospital of Sheridan.Ginny was born to Henry and Edna (Marrow) Heezen on April 14, 1947 in Sheridan,WY. She was raised in Sheridan and graduated from Sheridan High School. She married Tom Brown Jr onJune 22, 1968 at Holy Name Catholic Church in Sheridan. Together they raised their three children; Scott, Dawn and Michael. She was a Children\'s Librarian at the Sheridan Fulmer Public Library, an elementary school teacher at Holy Name and was currently working at Sheridan College in the Library. She was a member of the Council of Catholic Woman, Holy Name Catholic Church and the Big Horn Historical Society.Ginny enjoyed history, reading, gardening, her flowers, doing yard work, going to the mountains, most of all she loved spending time with her family and grandchildren.Ginny was preceded in death by her parents, brother Phil Heezen, and her father-in-law Jerry Brown. She is survived by her husband Tom Brown, of Sheridan, WY, her children; Scott (Kedron) Brown of Richmond, TX, Dawn (Joseph) Bennett of Abilene, TX, and Michael (Jennifer) Brown of Sheridan, WY. Also her sister Dorothy (James) Brennan of Sheridan, WY , her four grandchildren; Stephanie, Joseph Jr., Xavier, Piper and several nieces and nephews.A Rosary will be at 7:00 pm on Wednesday, March 26, 2014 at Kane Funeral Home with Father Jim Heiser Officiating. A Christian Mass will be at 10:00 am Thursday, March 27, 2014 at Holy Name Church with Father Jim Heiser Officiating. Inurnment will be in the Sheridan Municipal Cemetery with a reception to follow in the Holy Name Parish Hall.Memorials to honor Ginny can be made to the Holy Name School, 121 S. Connor,Sheridan, WY 82801, Sheridan College Foundation Library Fund, P.O. Box 6328, Sheridan, WY 82801 or the Sheridan College Foundation, P.O. Box 6328, Sheridan, WY 82801.Kane Funeral Home has been entrusted with arrangements.