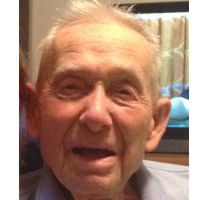 Weldon E. Godwin, Sr., 96, of Sheridan, passed away on Saturday, September 20, 2014, at the Sheridan Memorial Hospital.Weldon was born on April 3, 1918, in Milano, TX, to Eugene and Katy Bell (Standard) Godwin. He came to Sheridan in the fall of 1937, with the Civilian Conservation Corps and went to work for the VA. From 1939 to 1942, he worked for the Burlington Northern Railroad and from 1942 to 1979, he worked as an engineer until his retirement.Weldon married Helen Marie Copple on October 25, 1939. He enjoyed golfing, fishing, baseball, basketball, softball and all sports. He loved spending time with family and his friends.He was a member of the Eagles 186 and the BLE, Brotherhood of Locomotive Engineers.Weldon was preceded in death by his parents; wife, Helen; brother, Roy and his son, Rodney. He is survived by his sons; Weldon Godwin, Jr. and Thomas (Susan) Godwin, both of Sheridan; his sisters, Gladys Spell of Houston, TX, and Nadine Yokan, of Rockdale, TX. He is also survived by his grandchildren; Brent(Cindi), Chris , Dave (Melissa), Corey (Trudy), Heidi (John) and Dan; great-grandchildren, Emry, Mitchell, Blake, Madyson, Cooper, Tory Ann and DayAnna.A viewing will be, Wednesday evening from 6 PM to 7 PM at Kane Funeral Home. Funeral Services will be held at 10:00 AM on Thursday, September 25, 2014, at Kane Funeral Home, with Pastor Doug Goodwin officiating. Interment will be in the Sheridan Municipal Cemetery. A reception will follow in the Kane Reception Hall.Memorials to honor Weldon can be made to Joey\'s Fly Fishing Foundation, 109 S. Main Street, Ste B, Sheridan, WY, 82801.Kane Funeral Home has been entrusted with arrangements.