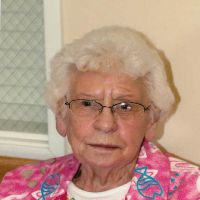 Wilberta (Bert) Oatts passed away Friday, May 19th in Denver, CO. Born in Sheridan, WY on September 15, 1929, to Etta Bassett Wehr and Wilbert Wehr, she attended Sheridan schools and graduated from Sheridan High School in 1947.  Following graduation, she worked for the Sheridan Welfare Office for a few years and then married J. Philip Oatts in Sheridan on August 4, 1950. She was a homemaker and loved to cook, garden, and attend her children’s activities.  All three of her children swam competitively for the YMCA swim team and she could be seen volunteering at all the home meets and going to all of the out of town ones. She also loved to water ski at Lake DeSmet and spend time at her trailer in the Big Horns Mountains.In her later years, Bert loved to travel and went on several trips abroad and around the U.S. with her friends, Pat Ebzery and Kay Logan.  They were quite the trio wherever they traveled and were fondly referred to as “The Golden Girls”.  She also enjoyed attending as many of her grandchildren and great-grandchildren’s sporting and school events as she could.  For decades Bert was a regular fixture at the YMCA at 5am, five days a week taking part in water fitness, weight lifting, and walking, plus socializing with her Y buddies at coffee in the fitness center. She continued to go three days a week at 6am until her death.  She was a role model to many at the Y, for they hoped to be as diligent as she when they reached her age.Giving back to her community was also important to her.  She volunteered many years at the YMCA and the WYO Theater helping with mailings, and worked at the desk in the surgery waiting room at Memorial Hospital.   She was a member of Holy Name Catholic Church.Bert is survived by her son, Rick (Debbie) Oatts, her daughters, Vicki (Charlie) Jorgenson, and Janice (John) Kane, her sister, Karen Stanbridge, grandsons, Nate (Krista) Jorgenson, Levi (Hollie) Jorgenson, Jason (Michelle) Kane, Troy (Sharon) Kane, and Tyler Oatts, all of Sheridan, granddaughters, Alyson Oatts, of Sheridan and Hattie (Ben) Carlson of Greeley, CO and 15 great-grandchildren. She was preceded in death by her parents and one granddaughter, Molly Oatts.Memorials to honor Bert can be made to the Sheridan County YMCA, 417 N. Jefferson, Sheridan, WY 82801.A Graveside Service will be held at 10:00 a.m. on Friday, May 26, 2017, in the Sheridan Municipal Cemetery with Father Glenn Whewell officiating. A reception will follow in the Kane Reception Hall.Kane Funeral Home has been entrusted with arrangements.