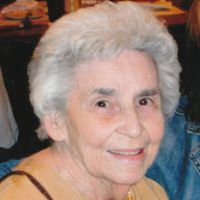 Willa “Billie” Lewis, 87, of Sheridan went to be with the Lord on Monday, December 7, 2015, at her home with family by her side. Visitation will be 6-7 p.m. Sunday, December 13, 2015, at Kane’s Funeral Home with graveside services to be held at 10 a.m. on Monday, December 14th in the Masonic 8 Cemetery. Mrs. Lewis was born September 3, 1928, in Promise City, IA to Floyd E. and Genevieve M (Allred) Wineinger.  She attended schools in Corydon, IA after moving there when she was four years old and graduated in 1946.   Billie worked for the law office of PW McMurry in Corydon until 1948, when she moved to Sheridan, WY in July of 1948. She worked as secretary to the director of the New Jr. College known as Northeast Agricultural Jr. College, now known as Sheridan College.  After all four of her children were in school she returned to Sheridan College, working in the college library as the Assistant Librarian.  She also worked three years in the Sheridan High School library. Willa married Eugene W. Lewis on December 11, 1948, in Hardin, MT. They had four children during their marriage.   Mrs. Lewis was a member of the United Methodist Church.  She enjoyed her family above all else.  She also enjoyed crafts, reading, putting jigsaw puzzles together and later in life, working Sudoku puzzles and watching TV sports.   Willa was preceded in death by her parents, two sisters, Norma Dorsey and Bernita Abel, her husband Gene and one son, Larry L. Lewis.  Billie is survived by her son Richard (Pat) Lewis of Silverton, OR, two daughters, Carol (Justin) Channel and Janet (George) Buszkiewic of Sheridan, WY; 9 grandchildren and 3 great-grandchildren, along with numerous nieces and nephews.In lieu of flowers, the family requests donations be made to Hospice of the Big Horns at PO Box 391, Sheridan, WY 82801 or to the Sheridan Memorial Hospital Foundation at PO Box 391, Sheridan, WY 82801 or to the charity of the donor’s choice.Kane Funeral Home has been entrusted with arrangements.