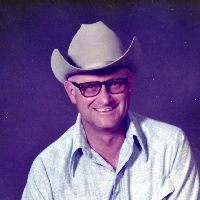 William Arthur Harper, 87, passed away on January 8, 2018 at the VA Medical Center after a short illness.      Bill was born on November 7, 1930 in Sheridan, WY to Earl Robert Harper and Ethel Maxine Barker Harper. Bill lived and worked in the Sheridan area his whole life       Bill was very proud of his family history in the Sheridan area. His grandparents arrived in Sheridan in 1886, traveling from Canada along the Bozeman trail. They were able to trade a buggy for 240 acres of land on Pompey Creek in Banner, Wyoming. It is there they started a small cattle ranch and placed their brand H on the first page in the Wyoming Brand Book. Bill’s grandfather was a master carpenter and helped to build many of Sheridan’s early buildings such as the Court House and Sheridan Inn as well as numerous homes and barns around the Sheridan area. His great grandfather William Stover was the first county attorney in Sheridan County and both his grandfather and father served as county commissioners for Sheridan County.       Bill’s early life was filled with work on the family ranch. His father was crippled from a horse accident so Bill did a lot of the day to day ranch work. When he was 10 years old one of his jobs was to make the three-day trip trailing the cows and calves from Banner to their pasture in Ulm all by himself. Bill attended grade school at Red Butte School where it was not uncommon for neighbor ranchers to pull him from class to help trail cattle. This was never a problem as Bill always rode his horse, Buster, to school and generally kept him close at all times.         After graduating from Sheridan High School in 1949 Bill enlisted in the Navy. He served from 1951 to 1955 on the USS. Aludra, a supply ship during the Korean War. His ship was stationed at Pearl Harbor but Bill spent most of his service in the western Pacific resupplying the carrier ships and escorts off the coast of Korea from supply bases in Japan or the Philippines.        After his discharge from the Navy, Bill came home to Sheridan and cowboyed on various ranches in the area including the Padlock, PK, and the Meade Creek Ranch. It was during this time that he met a young nurse, Shirley June Backer, that turned out to be the love of his life. Bill and Shirley were married on February 16, 1957 and were together for the next 60 years. They raised two children Susan Kay born March 14, 1958 and David Wayne born March 17, 1960.       In 1970 after working as a cowboy for many years, Bill decided to take a job with the Highway Department where he worked until he retired 17 years later. During his years with the Highway Department Bill plowed snow and worked on the striping crew and the sign crew. After retirement Bill remained active in the community driving the Senior Center minibus and delivering meals on wheels. Bill was a lifelong member of the Sheridan Elks Lodge #520.      Wherever Bill traveled or worked he always made lifelong friends. Bill was quick to help a friend or stranger, and quick with a joke. He was well respected for his work as a cowboy and his horse shoeing ability. Bill’s favorite times were spent visiting with friends and family; telling stories about the cowboys and the old days in the Sheridan area. His stories are treasured memories by the many that knew him.         Bill was preceded in death by his parents Earl and Ethel Harper, his infant brother Robert, his foster sister Betty (George) Wetzel Nimick, and his daughter Susie (Ken) Andrews. He is survived by his wife, Shirley, his son David (Sarah) Harper; his grandchildren: Jake (Vickie) Andrews, Jeff (Jessi) Andrews, Grace Harper, Sebastian Harper, and Katherine Harper; his great-grandchildren; Haiden Andrews, Kynber Andrews, Korbin Andrews, Hailey Andrews, and Kolby Andrews; as well as numerous Nimick family nieces and nephews and their children.     Memorials to honor Bill can be made to the Banner Community Club c/o Donna Hutson, 9 Upper Prairie Dog Road, Sheridan, WY 82801 or to Elks Lodge #520, Building Fund, Sheridan WY 82801.    A Celebration of Life with Military Honors will be held at 2:00 pm on Monday, January 15, 2018 at Kane Funeral Home with Pastor Doug Goodwin officiating. A reception will follow at Kane Reception Hall.Kane Funeral Home has been entrusted with arrangements.