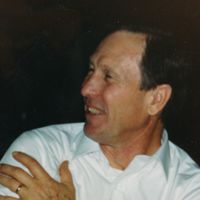 William “Bill” Aksamit Jr. , 81, of Sheridan, passed away in Billings, MT at St. Vincent Hospital peacefully with his immediate family and all seven of his siblings on January 29, 2018. Bill was born in Monarch, Wyoming to Helen and William Aksamit in their home on December 22, 1936. He graduated from Sheridan High School with the class of 1955 and then served in the Airforce in 1955-1960, serving one year in Iceland. After the Air Force, he attend Weltec College in Salt Lake City, Utah.He met the love of his life, Lenora Haugen and married her in 1964. In November they celebrated their 53rd wedding anniversary. They started their new life in Casper, WY where he worked for Mountain Bell and began their family. They had two children, Lisa and Rob. The family was transferred to Sheridan, WY in 1973 and he was employed with AT&T until he started his own business, Sheridan Telephone Company, till he retired. He was known as the “The Telephone Man” around Sheridan.Family was #1 to Bill. He loved to fish with his dad, his three brothers, Rob and Lisa, and his many nephews. He carried on his dad’s tradition of searching for wild mushrooms in the Big Horn Mountains. He enjoyed taking his dogs for walks on Linden Hill and on weekend hiking excursions in the mountains. He enjoyed camping with his family. Hunting was a yearly event with his father, son Rob and three brothers, Tommy, Kenny, and Jimmy.He had many skills and talents ranging from building his own home and fixing all mechanical vehicles from his lawnmowers, motorcycles, and cars, like Lisa’s vehicles. Later in life, gardening became his favorite pastime-growing beautiful tomatoes and sharing his garden bounty with family, friends, and neighbors. No one left without a petunia or tomato plant in hand. He was often found puttering around in his garden.His three granddaughters, Brooke, Bailey, and Bree spent countless hours together riding on the lawnmower, picking peas & apples, and cherishing times on a swing made especially by “Poppy”. The girls nicked named him “Poppy”.Bill was preceded in death by his parents, William and Helen Aksamit. He survived by his wife Lenora Aksamit, daughter Lisa Aksamit, and son Rob (Tonya) Aksamit. His granddaughters: Brooke, Bailey, and Bree Aksamit. Siblings: Joan Miller, Cheyenne, WY; Tom Aksamit, Sheridan, WY; Denise (Jim) Holt, Ranchester, WY; Ken (Sharon) Aksamit, Salt Lake City, Utah; Mary Ann “Lolly” (Colin) Baxter, Anchorage, AL; Jim (Bonnie) Aksamit, Sheridan, WY; and Carol (Michael) Jiacoletti, Cheyenne, WY.As a special note to all who knew and loved him, Bill’s family is thankful for your prayers and thoughts. Bill’s gentle, kind, and unselfish soul, will live in our memories forever.A Visitation will be held at 6:00 pm with a Rosary at 7:00 pm on Thursday, February 1, 2018, at Kane Funeral Home with Father Ron Stolcis officiating. Mass of the Christian Burial will be held at 11:00 am on Friday, February 2, 2018, at Holy Name Church with Father Ron Stolcis officiating. Burial will be in the Juniper Heights section of Sheridan Municipal Cemetery with military honors. A reception to follow in the parish hall.In lieu of flowers, you may donate to the Holy Name Catholic Church, 260 E. Loucks St., Sheridan, WY, 82801 or The Hub, Senior Center, 211 Smith St. Sheridan, WY, 82801.Kane Funeral Home has been entrusted with arrangements.