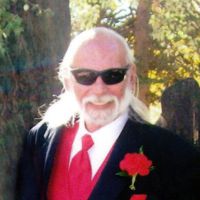 William Dean “Bill” Caskey, 61, of Sheridan, Wyoming, passed away in his home, as he wished, surrounded by his family after a courageous battle with cancer.Bill was born April 9, 1953, in Sheridan, Wyoming. His parents were Daisy Doris Barnes and Phil Reimers. He lived in Wyoming his entire life, moving here and there as a youngster with his mother and big brother Dan Daniels.He attended schools in Casper and Sheridan. When he was in about the 5th grade, Casper schools gave the children a day off of school because John F. Kennedy was coming through town. He shared that it didn’t mean a lot to him at the time, but John F. Kennedy shook his hand.From an early age, he learned to hunt and use guns, which eventually became a huge passion of his. His maternal grandfather, Perry Barnes, and a longtime family friend, Fred Gates, taught him the ropes, his love for hunting, and respect and appreciation of guns.His brother, Dan Daniels, 13 years older than he, taught him how to be ornery, stand up for himself, and love with all your heart, which of course, was bolstered by a mother who could be tough, but love abounded them all.Bill married Yvonne Reimers, and in that union had two daughters, Carey and Billie. He and Yvonne divorced when the girls were youngsters, but they remained friends throughout his life. His love for his daughters was beyond any measure you could label it as. He was a very proud dad, and recently told friends his girls were his greatest accomplishment in life for they were beautiful inside and out.Bill had three other loves in life, Irene, Nancy Lou, and Tammy. Bill was a tremendous cook, and he loved more than anything to share his gift and grub with anyone and everyone often having small and large gatherings at his home, cooking for people’s weddings, and even charity events.He had a desire to help others, and it showed through his many gifts not only to his family and friends, but even to people he’d never met. He made a dream come true when he built his shop (aka the treehouse). More meat and people came through that place than one can imagine. He was proud of what came together.Bill was known for being a tough biker dude who didn’t mince his words, but his heart, oh his heart, it was bursting at the seams with love and the desire to help others. Many who knew him often heard, “I’m on a Mission from God.” It could be as simple as cooking up some chicken and noodles for his daughters or friends to take over to them when they were sick, finding a couch for a family who had no furniture, seeing random people fresh out of jail needing a ride somewhere, etc., or as big as raising money to help someone with medical expenses.His annual Christmas fund drive was dubbed “Wild Bill’s Angels Christmas Fund” by his friends. He spent well over 25 years giving to those in need, one year providing two banana boxes of food for 27 families.He worked construction in his early twenties, and then for the City of Sheridan as a Wastewater Treatment Plant Operator beginning in January 1984 to June 2014, over 30 years. In the early 90s, he was an instrumental player in fighting for a union within the City of Sheridan. He took a lot of pride in what he did and what he fought for. He believed in it with all he was, and saw that effort come to fruition when a charter with the UMWA was signed in 1992. He served in the capacity as the President of the Local UMWA for the City, and remained a part of it until it dissolved.He was a member of the Eagles, Moose Lodge, NRA Association, ABATE club, and others throughout his lifetime, and he was associated with a few churches but grew fond of First Christian Church and his buddy Doug Goodwin.Bill loved hunting, camping, fishing and spending time with his girls, his sons-in-law Marv and John, and his granddaughter Madison and friends. He will be remembered as being “larger than life,” always lending a helping hand, and having a huge heart. He was there to listen to everyone and gave great advice, and it wasn’t always the advice some wanted to hear, but it was honest and genuine.Bill’s heart was tender, loving, and kind. He did many things for people throughout his entire life and never wanted credit or acknowledgment. In fact, about a week before he passed away he told his daughters he needed to pay everyone who had been coming over to help out. The shear joy that filled his heart from helping people was enough for him, enough that he continually was giving to others.Bill was preceded in death by his mother, Daisy Barnes Reimers; his ‘pops,’ Phil Reimers; his grandparents, Perry and Bessie Barnes; his brother, Dan Daniels; and his uncles, Perry Junior., Jay, and Ernie Barnes. He is survived by his two daughters, Carey (Marv) Harp and Billie (John) Lieuallen; grandchildren, Tessa and Travis Harp, and Madison “Madd” Lieuallen; great-grandchildren, Austin Duerksen and Liberty Harp; sister-in-law, Dixie Daniels; aunt, Jean Barnes, several nieces and nephews, and many friends to include Ed Smith, Jerry & Sandy Maddox, Doug Goodwin, Dick & Sandy Larner, Rex Cahhal, Judy Horsley, and his little sis Connie Johnson.Memorials may benefit Wild Bill’s Angels Christmas Fund, First Interstate Bank, c/o Jenny Epperson, PO Box 2007, Sheridan, Wyoming.Celebration of life will be at First Christian Church, 102 S Connor, Sheridan, Wyoming, on Saturday, February 14, 2015, at 10:00 a.m. with Pastor Doug Goodwin officiating.Kane Funeral Home has been entrusted with arrangements.