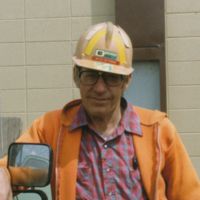 William E. Githens, Jr., 86, of Sheridan, went to his eternal home on Friday, May 23, 2014. He was born on May 12, 1928, in Douglas, WY to William Edward and Velma Fisher Githens. He grew up on the family homestead north of Douglas, attended schools in Douglas and graduated from High School in Waxahachie, TX, where he met and married Margaret Miles in 1948. They returned to Wyoming and raised three children.Bill worked for his father operating heavy equipment and later for several other companies doing road construction. In December 1974, he went to work for Decker Coal and operated scrapers, dozers, and dart loader. In 1977, he was promoted to foreman of a scraper crew and then a dragline crew. In 1978, he transferred to the training department as an operator instructor. He then returned to being a crew foreman until he retired in 1990. During retirement, he enjoyed working on his mini ranch on Meade Creek until moving back to town in 1997.In 1986 he married Karen Sessions and they enjoyed traveling, especially their six week trip to Alaska in 1999. They spent four summers managing campgrounds in the Big Horn Mountains. He helped deliver meals for the Sheridan Senior Center for 16 years.Bill is survived by his wife, Karen, one son, David (Sue) of Sheridan, two daughters, Synthia (Ray) Cooley of Gillette, Linda (Ted) Cecil of Las Vegas, seven grandchildren, seven great-grandchildren and one great-great-granddaughter, two stepdaughters, Sonya (Tony) Thorpe and Brenda Cross of Sheridan, two step grandsons and one step great-grandson, one brother, J.R. (Dottie) Githens of CA, several nieces, nephews and cousins.Bill was a quiet, kind and gentle man and had a deep love for God and his family. He was a member of Family Life Center.A Celebration of Life for Bill will be held at 10:00 a.m. on Thursday, May 29, 2014, at Kane Funeral Home with David Githens officiating. A Reception will follow in the Kane Reception Hall.Memorials to honor Bill may be made to the Sheridan Senior Center at 211 Smith Street, Sheridan, WY 82801.Kane Funeral Home has been entrusted with arrangements.