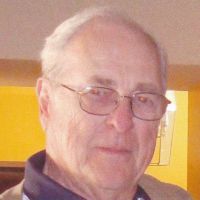 William Henry Harrison (Bill) died Saturday morning, May 3, 2014 at the Sheridan County Memorial Hospital. Born June 16, 1923, in Indianapolis, Indiana, he was the son of the late Honorable William Henry Harrison and Mary Elizabeth (Newton) Harrison.Bill came to the Sheridan area with his family on vacations and fell in love with the area and stayed through his high school years. His parents moved to Sheridan, in the 1930’s after purchasing the IXL Dude Ranch. He married his high school sweetheart, Betty Alley, on December 10, 1941, and they both helped run the ranch. After the ranch was sold, Bill graduated from the University of Wyoming, returning to Sheridan to work with for his Father’s campaign for US House of Representatives. Bill spent many hours flying his father on the campaign trail. Bill later started his own accounting practice in Sheridan. In 1970, Bill moved to Washington, DC, where he worked for the Board of Renegotiation, Department of Energy, and Department of Interior, before retiring to the Sheridan area.Bill was an active member the Elks Lodge, where he became the Exalted Ruler and 50 year member, the Masonic Temple, becoming a 33 Degree Mason, as well as a member of the Order of Court Jesters. He enjoyed playing golf and cards with his Elks and Shrine Brothers, but he was most happy spending time with his family and friends at the family cabin he built (The Little Goose Lodge) in the Big Horn Mountains.Bill was proceeded in death by their first two children, Nancy and William, in loving memory. He is survived by his loving wife of 72 years, Betty Virginia Alley Harrison, along with two children, Barbara Moses (Jim) of Jackson, Wyoming, and John Harrison (Deborah) of Overland Park, Kansas, and his Sister, Maribeth Rose; Grandchildren: John Harrison, Commander Thomas Tyler Harrison (Kim), James Sundahl Charles Sundahl (Mia), and Carolyn Harrison. Great Grandchildren: Madison and Benjamin Harrison, Christin, Keaton, Allyson Harrison, and Jazmin Sundahl. Nieces and Nephews: Denton Alley, Robert Alley (Kathy), Ryan Alley (Nicolle) Beth Brewer, Tom Brewer (Verna), Walter Brewer and Linda Buchholz.A Celebration of Life for Bill will be held at 10:30 a.m. on Wednesday, May 7, 2014 at Saint Peter\'s Episcopal Church with Father John officiating. A reception for friends and family will follow at the Warehouse 201. A private graveside service will be held for family members.In lieu of flowers, memorial donations may be sent to the Almonders Fund at St. Peter\'s Church at 1 S. Tschirgi, Sheridan, WY 82801 or to the Kalif Shrine Children\'s Fund at P.O. Box K, Sheridan, WY 82801.Kane Funeral Home has been entrusted with arrangements.