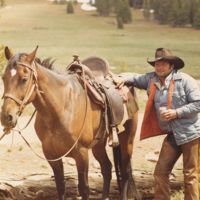 View Service Folder | Click for Video Tribute William “Willie” Kukuchka, 85, of Sheridan, passed away on Thursday, December 18, 2014 at the Green House Living. He was born on October 4, 1929, in Ranchester, WY, to parents Mike and Anne (Bocek) Kukuchka.Willie loved the outdoors, he enjoyed hunting, fishing, and dancing. He was a member of the Elks and the Eagles.Willie was preceded in death by his parents, and brothers, Karl, Mike, John, George, and Joe Kukuchka, and sisters; Eva and Mary. He is survived by his son, William Kukuchka of SD, brothers; Eddie and Frank, four grandchildren and three great grandchildren.A Visitation will be held from 6 to 8 pm on Sunday, December 28, 2014, at Kane Funeral Home. Services will be held at 10:00 am on Monday, December 29, 2014, at Kane Funeral Home with Reverend Kevin Jones officiating. Burial with Military Honors will follow in the Sheridan Elks Memorial Cemetery. A reception will follow at the Elks Lodge.Memorials to honor Willie may be made to the Elks Building Fund at 45 W. Brundage, Sheridan, WY 82801 or to the Green House Living of Sheridan at 2311 Quail Ridge Dr., Sheridan, WY 82801.